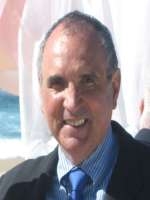 Ronald Joe Macsenti was born in Escalon, California in 1945 to loving parents, Deno and Bonnie Macsenti. Ron attended and graduated from Dent Elementary School and Escalon High School. Ron attended Delta Junior College in Stockton, California before entering the United States Air Force in 1965. While stationed at Luke Air Force Base in Arizona, Ron met the love of his life, Kathleen Gabry, and they were married on May 30, 1968. Ron served a tour in Vietnam in 1969 and was a decorated Veteran of Foreign Wars. After serving his country in the military, Ron and Kathy settled in Phoenix, Arizona where son Deno Anthony and daughter Angela Lori were born. Ron moved his family to Walnut Creek, California in 1976 to take a position with a national advertising agency until they returned to Phoenix in 1979 where Ron and Kathy continued to raise their family. Ron also furthered his professional career in Graphic Advertising and Marketing. Ron had an endless passion for his work, creative arts and sports. He lived every day like it was his last. Ron was a loving Son, Brother, Uncle and a devoted Husband, Father and friend. He will be forever loved and deeply missed by everyone he touched in his short life. Ron is survived by his children, Deno and Angela and his brothers, Tom and Mark. Scripture Service will be held Wednesday November 2, 2011, 7 PM at Whitney & Murphy Funeral Home 4800 E. Indian School Road, Phoenix, Arizona 85018. Funeral Mass will be held Thursday November 3, 2011, 10 AM at St. Gregory Catholic Church 3424 N. 18th Avenue, Phoenix, Arizona 85015. Interment will follow at St. Francis Catholic Cemetery. Flowers will be received at Whitney & Murphy Funeral Home. Donations are encouraged via mail or internet to Vietnam Veterans of America; www.vva.org; 8719 Colesville Road, Suite 100, Silver Spring, Maryland 20910.

Offer Hugs From Home Condolence for the family of MACSENTI, RONALD JOE