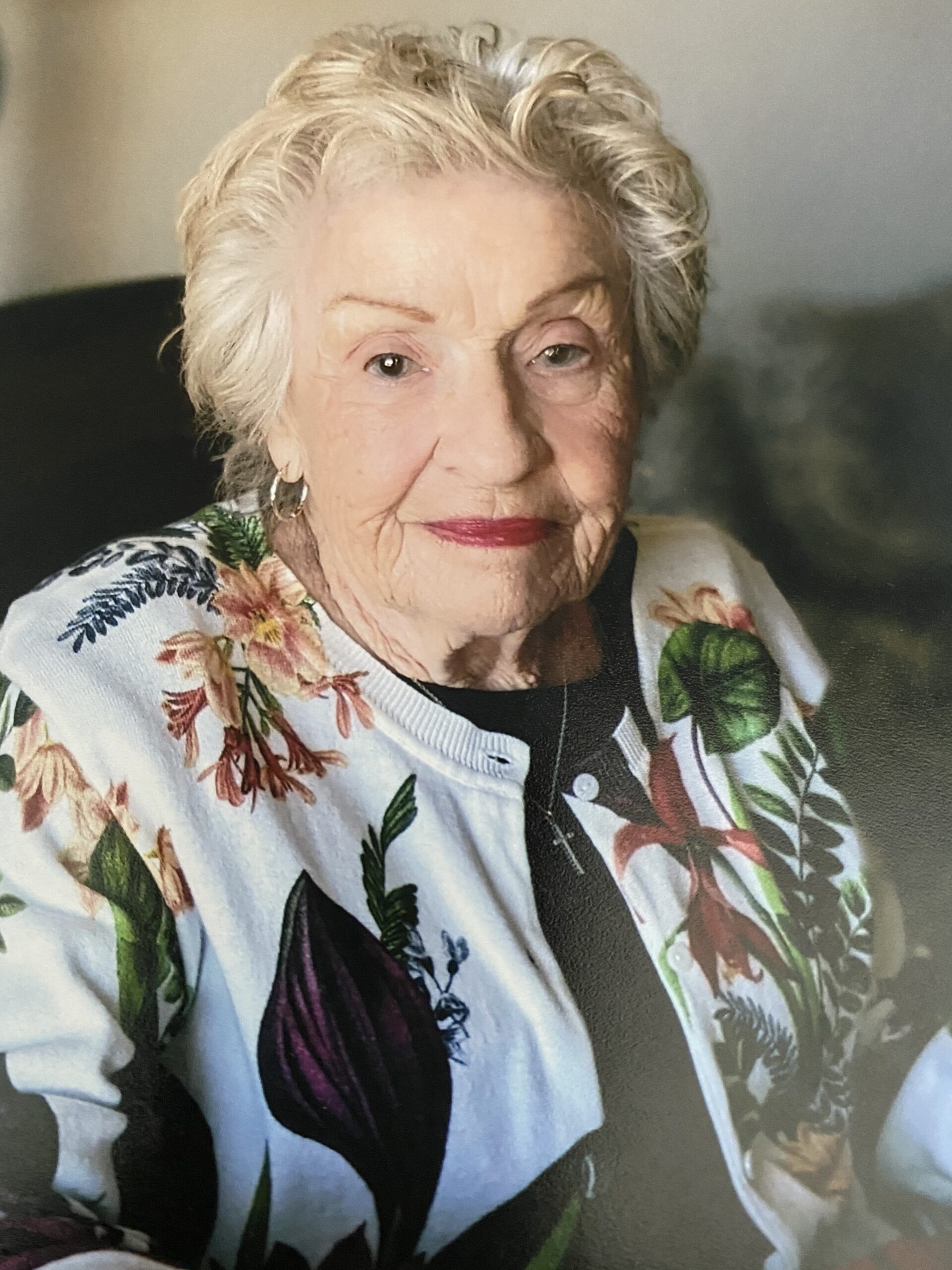 Stella Estrella Maloney went to be with her husband Mike on April 13, 2021.

Born Stella Estrella on July 17, 1927, to Raymundo and Rose Estrella in Chandler, Arizona. Stella and her sister’s Ramona and Rose loved their Chandler community where they were very active in St. Mary’s Catholic Church Parish. Attending Chandler High, she was on student counsel and she was a Chandler High School cheerleader. Stella worked at Wright’s Jewelry store where she met her future mother-in-law, Edna Maloney. Edna insisted that her son go introduce himself to the town beauty.

After several failed attempts at proposing, Mike finally wore her down and Stella said yes. She and Mike Maloney were married on July 4, 1949, at St. Mary’s Catholic Church. They had great friends and she was very involved in Chandler’s Junior Women’s Guild and St. Mary’s Catholic Church Sodality. As good Catholics in the 1950-60’s, they soon had a house full of children; Deborah Maloney, Shannon Dixon, Maria Maloney, Bridget Hay, Katie Cirelli, and Tim Maloney.

Mike relocated his family to Phoenix working for Arizona Public Service and later for First American Title and Trust Company. They settled into the Arcadia area. Stella was a wonderful homemaker and mother. She gifted her children with her great love of reading. Every Saturday she loaded her gang into the station wagon, (no seatbelts) and took them to the library. They always took their quota of books and stacked them on the dining room table until their chores were done. Her labor force quietly disappearing throughout the day with their books, leaving she and Mike to finish the job.

Stella was very active at the kid’s schools as a home room mom for many years and helping with the Hopi Hulabaloo. Keeping the house stocked with their friend’s favorite snacks, Stella fed everyone who showed up at Launfal at the end of the school day. Friend’s called it Stella’s Seven/Eleven. She and Mike hosted float parties for their high schoolers attending Gerard Catholic High School, even installing a pay phone when Mike was tired of all the kids using his home phone. She had a great love of sports and encouraged all of her children to participate, never missing one of their games, tournaments or meets.

Stella combined her love of books and commitment to community service joining VNSA, Visiting Nurse Service Auxiliary, to collect and organize books and help run the VNSA book sale every year with a large group of her dear friends. She took many art classes and was a very talented artist working primarily pastel. Stella was on the board of and past president of Shemer Art Center.

Stella and Mike were Arizona State University’s number one sports fans, attending all home and many out of state games. As members of the Sun Angel Foundation, and Mike’s years as a Thunderbird, they were involved in the building of stadiums, golf courses, practice fields and statues honoring some of ASU’s great athletes and coaches. She was an avid tennis player, playing weekly games with her girlfriends and doubles with Mike. Stella and Mike were great partners on the tennis court, dance floor and everyday life. They enjoyed a great and large group of friends with whom they shared travel, sports, lots of laughs and more than a few drinks.

Stella is preceded in death by her parent’s, Rose and Ray Estrella, sister’s Ramona Ruiz and Rose McCallister, and nephew, Nicolas Ruiz.

Since Mike’s passing in 2007, Stella remained active and joyfully involved with her thirteen grandchildren and five great grandchildren, whom she read too, did art projects with and worked puzzles with. She shared her love the moon and clouds and trees. She modeled for her children how to be good partners and great parents. She made her way through dementia with grace and as much dignity as possible. Stella is currently having a scotch in Heaven at Navarre’s with Mike, Jake McGrath and Marie and Owen Chilress. A private family memorial service will be held on Saturday, May 15, 2021. Please make donations to First Book support.firstbook.org
Condolences may be expressed at www.whitneymurphyfuneralhome.com

Offer Hugs From Home Condolence for the family of MALONEY, STELLA ESTRELLA