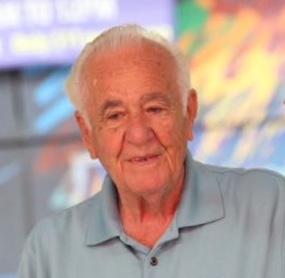 Michael Frank Manguso passed away on Thursday, November 7th, 2019 at the age of 97. Big Mike passed away peacefully at the long-time family home near 38th street and McDowell in
Phoenix surrounded by loved ones.
Mike was born in Buffalo New York on November 5, 1922 to his father, James and mother, Mary Manguso. He was one of 10 children.
Mike served in the Army Air Corps from 1942 thru 1945, where he served his country as an airplane mechanic in England during World Word II. He also played the clarinet and saxophone in the USO band. He later continued to serve in the Army National Guard.
Mike subsequently met and married his late wife Mary Pagano in 1946. They were married for 56 years. At the time of her passing in 2002, at age 84. Shortly after that they decided to move to Phoenix Arizona and raise a family and build what eventually became the Family business, (McFarland’s Carpet Service, which has been in service now for over 70 years). He is survived by his 3 beautiful children. Mike was a founding member of the Arizona American Italian Club, established in 1957.
He was preceded in death by his mother and father, his wife Mary, his older brothers, Eddie, Carl, Anthony, Sammy and his sisters Rose Caparella, Clara Occhino, Helen Fialla.
He is survived by his sisters Marie Barnes and Gloria Maggio; children Pam (Floyd) Westfall, Beverly (Doug) Oleson, and Michael (Debbi) Manguso; 5 grandchildren; 11 great grandchildren; 2 great great grandchildren; and many nieces and nephews.
He was an incredibly kind and generous man of many talents and was especially known for his love of bowling and lifelong hobby. He achieved an 800 series and many 299’s, but never could get that 10 pin to drop for the “300”. In 2014 he was the only person to have bowled in 60 consecutive Arizona State tournaments. He is a member of the Phoenix Bowling Hall of Fame.
In lieu of flowers, donations can be made to Hospice of the Valley. Visitation will be held from 6:00 to 8:00 p.m. on Thursday, November 14, 2019 at Whitney & Murphy
Funeral Home, 4800 E. Indian School Road, Phoenix. A Funeral Mass will be held Friday, November 15, 2019 at 10:30 a.m. at St. Mark’s Catholic Church, 400 N. 30th Street, Phoenix. Immediately following; a reception will be held at Arizona American Italian Club, 7509 N. 12th Street, Phoenix. Condolences may be expressed at www.whitneymurphyfuneralhome.com

Offer Hugs From Home Condolence for the family of MANGUSO, MICHAEL FRANK