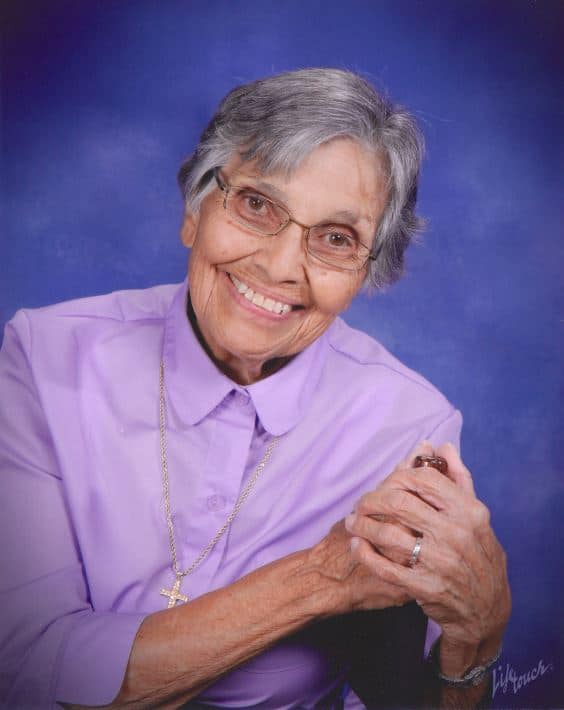 On the afternoon of May 9, 2022, Bette D. Maniatis received her long-awaited crown of righteousness, after living a life entirely devoted to serving the Lord. Born on June 20, 1929 to David and Daisy Maniatis in Chicago, IL, Bette was the youngest of their three children, with two older brothers John and Peter. Blessed with the baptismal name of Panagiota, Bette was inspired by the love and dedication of the Theotokos, and her example of unselfish devotion to the Lord’s will for her life.

Bette’s life revolved around her faith. She was raised in a home where her Orthodox faith and Greek traditions were prominent in her upbringing. While attending Catholic high school, Bette became interested in the Catholic religion, learned to pray the rosary, and desired to go to confession. In 1943, when Bette was just 14 years old, her knowledge of the Greek Orthodox faith was limited because its presence in the United States was still in its infancy. Bette found Catholicism to be more accessible and relevant for her life, and she soon recognized that she yearned for the opportunity to commit her life to Christ. Her senior year in high school was a pivotal time with the passing of her beloved father, and Bette later reflected that had he not passed away suddenly she probably would not have left her Greek Orthodox faith. At the age of 18, she formally joined the Catholic faith, leaving a note for her family of her decision which caused them great distress.

The recipient of a scholarship to Rosary College, Bette began her college studies but the pursuit of a religious vocation became an even more compelling desire in her heart. In September 1950 she joined the Dominican Sisters, leaving a letter for her mother with news of her decision. When her mother read the letter, she went into a diabetic coma and Bette had to return home, amidst growing tension with her brothers. When her mother recovered, she accepted Bette’s decision and helped her leave home and relocate to Champaign, Illinois to continue her education. Bette had limited resources and worked as a babysitter, but the funds were quickly depleted after her first semester. She was given the opportunity to work at Mercy Hospital, where she would earn 50 cents an hour, received free meals, and could attend Mass daily. Little did Bette know at the time that she would end up spending 30 years at Mercy Hospital.

By September 1951, Bette had made her final decision. She entered the Servants of the Holy Heart of Mary, taking the name of Sister Mary Magdalene, where she would be assigned to work at Mercy Hospital as a Medical Technician,.

Bette earned her Master of Science in Social Work in 1971 and continued her work as an Administrator of a Medical Laboratory, Director of Social Work, and Director of Hospice. She spent a total of 40 years serving in various capacities in the Catholic Church, and achieving the position of Superior. Within Mercy Hospital, she opened a Social Services department, and later she pioneered the development of a Hospice unit, the first in-patient terminally ill care facility of its kind in Illinois.

But, something was missing from Bette’s life. In 1983, she took a sabbatical and began a prayer journey that would lead her back to her roots as a Greek Orthodox Christian. She learned the Jesus prayer which changed her and became the ceaseless prayer in her heart. She became more forgiving of others and more compassionate. Then on February 6 – her mother’s birthday – as Bette was praying in the hermitage, she realized that being obedient to God could mean leaving the religious life she had known since her young adult years. She did return to her position as a Sister for a year, but she received a canonical blessing to live apart from the sisterhood, working on her own, while physically separated from the Order. It was during this time that her brothers John and Peter encouraged her to come to Phoenix. She stayed with John in his home, with the understanding that she would serve the elderly at Holy Trinity Greek Orthodox Church in Phoenix, AZ. She had been gone from her childhood home for over 40 years, and now she had the opportunity to reconnect with her brothers and get to know them as adults. She attended daily Divine Liturgy at the parish and the petitions and prayers penetrated her being, and the mystical experience was unequaled.

By October 1985, she was officially dispensed from her vows of poverty, chastity and obedience, though she maintained them for the remainder of her life. Her brother Peter brought Bishop Anthony of the Greek Orthodox Diocese of San Francisco to visit Phoenix. Bette spoke privately with the Bishop where he asked, “Are you ready to become Orthodox?”, to which Bette answered “Yes”. She was even surprised at the eagerness of her response. The following weekend, on Sunday, March 16, 1986, Bette embraced Orthodoxy, with her beloved spiritual father, Father James Tavlarides presiding over her Chrismation, and her Godmother Presvytera Catherine Tavlarides at her side. And as she had agreed upon with Bishop Anthony, Bette departed for the Monastery of Moni Kalyviani in Heraklion, Crete on Monday, March 17, 1986. It was there she became fully immersed in the faith, familiarizing herself with the Divine services, prayers, language and hymnology. She was inspired and uplifted by the simple and untainted life of the sisters.

When Bette returned to Phoenix, she became a full-time volunteer, social worker and pastoral counselor at Holy Trinity. She worked closely with the Orthodox priests in the Phoenix area, supporting their ministry and providing counseling and guidance for the elderly, young families, and those who were sick. Wherever there was a need, Bette was there to fill it, guided by her faith and sharing the unconditional love of God.

Bette held the hands of people as they transitioned from the earthly world to paradise. She was a calming and prayerful presence for many women during childbirth. She attended doctor appointments with parishioners, using her professional expertise in Medical Technology to guide people as they journeyed through cancer, dementia, heart attacks, strokes, life-threatening illnesses, and more. She attended every service and sacrament at church. She was a pillar of the community through her dedicated service and her prayerful demeanor that never ceased until her last breath. Bette developed close personal relationships with many priests, deacons, their wives and children. And just as they became a special part of her family, they also valued Bette as a spiritual mother and recognized her as an immense blessing in their lives.

Bette was predeceased by her parents David and Daisy Maniatis, her brother and sister-in-law John and Mary Maniatis, her brother Peter Maniatis, and her niece Debra Rogers (Robert). She is survived by her sister-in-law Maria Maniatis, and Maria’s family Kerri (Dino) Panagas, Kristina (Col. Anthony) Marinos, Kathy (Jerry) New, and great grandnephews and nieces Matthew (Jacky) Walsh, Gabrielle (Constantine) Magginas, and Niko Marinos. She was also a cherished aunt to Phyllis Mack and Frances Attocchio. Bette was a beloved godmother to many children and adults whom she lovingly nurtured in the faith, for nothing brought her greater joy than to see people embrace Orthodoxy and live a life in the fullness of Christ. Bette’s church family filled her life with immeasurable joy and she became an adopted Yiayia (grandmother) and Thea (aunt) to children with whom she shared her faith, love and lifelong commitment to Jesus Christ. To say she will be missed is an understatement, but anyone who knew and loved Bette, knew that she long-awaited this day to be with the Lord in paradise. That she has passed from death to life during the Paschal season and knowing that the triumphal hymn “Christ is Risen” will be chanted at her funeral makes this the perfect ending to her earthly life and the beginning of her eternal rest in the arms of her Lord and Savior Jesus Christ.

Visitation will be held on Saturday, May 14 at 9:00 a.m. followed immediately by the funeral at 10:00 a.m. All services will be held at Holy Trinity Greek Orthodox Cathedral, 1973 E. Maryland Avenue, Phoenix, AZ 85016. The funeral service will be livestreamed online at: https://www.facebook.com/holytrinityphx.org. The interment will follow at Paradise Memorial Gardens, 9300 E. Shea Blvd, Scottsdale, AZ 85260. All are invited after the interment to a traditional Makaria (Mercy Meal) at Holy Trinity Greek Orthodox Cathedral – James A. Speros Community Center.

Bette offered this reflection during a presentation she made in 1988 called “My Journey Home”:

“My return to Orthodoxy is the story of a prodigal. Not knowing the wealth that was mine as an Orthodox Christian, I squandered what I had and went in search of what appeared better and right in the Catholic faith. Forty years later I have returned from exile. I have come home to Orthodoxy, deeply grateful for God’s compassion and love. I am now committed to live the Orthodox life, to be all that God wants me to be, that His compassion and love and Truth may be known to others. I pray that God continue to direct my path and teach me His ways all the days of my life.”

May her memory be eternal!

Offer Hugs From Home Condolence for the family of MANIATIS, BETTE D.