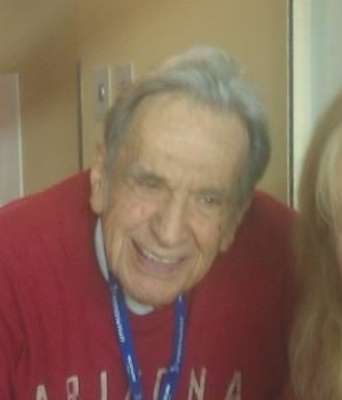 93, of Phoenix, Arizona passed away on November 24, 2014. We lost one more from the Greatest Generation. Born in East Liverpool, Ohio, 1921, he is a veteran of WWII. Vincent moved to Arizona in 1950 and worked for A J Bayless Market for 32 years retiring in 1985. He was a big sports fan and enjoyed his D-backs, Suns and Cardinals. He is preceded in death by his wife Violet of 52 years and survived by son Larry, son-in-law and daughter Denise and Ernie Pinson, 3 grandchildren, Alexis, Vincent, Deana and 3 great-grandchildren. Vince will be missed deeply by friends and family. Funeral Mass at 1:00pm, Monday, December 8, 2014 at St. Gregory Catholic Church, 3424 N. 18th Avenue, Phoenix. Interment will take place at 10:30am, Tuesday, December 9th at the National Memorial Cemetery of Arizona. In lieu of flowers family is requesting donations to Hospice of the Valley, 1510 E. Flower Street, Phoenix, AZ 85014. Arrangements entrusted to Whitney & Murphy Funeral Home.

Offer Hugs From Home Condolence for the family of MARTINO, VINCENT