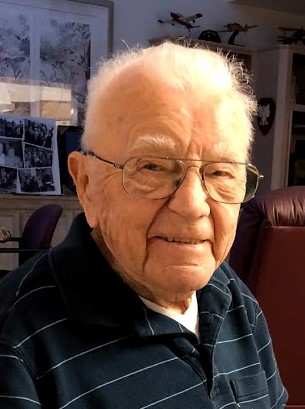 Lt. Col. John Marusiak, Jr. USAF Retired, 100 years old, went to be with the Lord on February 4, 2018. John was born in West Newton, PA on April 19th, 1917. He grew up in Michigan to Polish immigrants, Antonina Goscinski and John Marusiak. He joined the US Army Air Corp the day after the Pearl Harbor attack. During WWII he was a P-47 and P-51 pilot. He completed over 100 sorties, including 3 on D-Day. He married Angeline Gadzinski on November 26, 1944, the love of his life, and they celebrated over 61 years together until she passed in 2005. He was a fighter pilot, a test pilot as well as a flight instructor. He retired from his military service and moved his family to Phoenix in 1965. John and Angie started Micro-Tronic, Inc, an ongoing Aerospace Manufacturing Company in 1968. He was CEO of the company until his retirement in 2000. After retirement, his greatest joys were centered around his love of family, golf, flying his planes, bridge, his faith and friends. John leaves a legacy of living life to its fullest and being an inspiration to all who met him. He is survived by his children, Ronald (Barbara), Edith (Gerald) Remaklus, Janet (Mark) Travis and Carol Ann (George) Chase and his daughter-in law, Lucia Marusiak. His children, 12 grandchildren and 6 great grandchildren will miss him immensely. He is preceded in death by his wife Angie, his son Robert and his three siblings. Interment will be announced in advance and take place at The National Cemetery in the near future. In lieu of flowers, donations can be made to Mount Claret, St. Vincent De Paul or Circle the City in John’s memory. Arrangements entrusted to Whitney & Murphy Funeral Home.

Offer Hugs From Home Condolence for the family of MARUSIAK, JOHN JR.