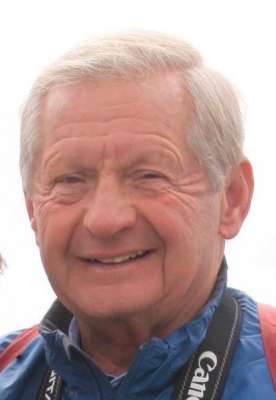 Dick Masica, 77 of Scottsdale, AZ died on June 4, 2014 following a brief illness.  Dick was born on January 9, 1937 in Saginaw, Michigan to Leo and Clara Masica.  After graduation from Holy Rosary High School, Dick received his civil engineering degree from Michigan Tech University and his master’s degree from Cornell University.  He then began a 39 year career with Texaco, Inc. that took him to New Jersey, Sweden, Texas (several times and places), Louisiana, Wyoming, New York, and Kansas.  In retirement, Dick and Joanne, his wife of nearly 56 years, settled in Frisco, Colorado where their lives centered on family, community, church, outdoor activity, and travel.  Dick became an active member of Rotary International, especially in Colorado and Chandler, AZ, and served on the board of The Summit Foundation.    Dick is survived by his wife Joanne, daughter Sue, son Paul and daughter-in-law Teresa, and grandchildren Jake and Jessie; sisters and brother and their families.   A Mass and Celebration of Life will be held in Summit County, CO in July.  In lieu of flowers, donations may be made to The Summit Foundation (Breckenridge, CO) or St. Mary’s Church (Breckenridge, CO).

Offer Hugs From Home Condolence for the family of MASICA, RICHARD L.