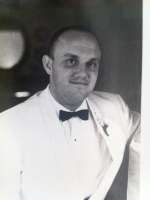 George Michael Matanovich, 78, a lifelong Phoenician died October 14th. Born June 22, 1934 in Phoenix, Arizona, George attended Emerson School, North High School and the University of Arizona. After college, George served in the Army then began working as an engineer for Motorola in Phoenix. His passion for cooking and entertaining led him to open the original Duck and Decanter on Camelback followed by an over 25+ year career as a commercial and residential contractor. George’s interests were many but his true love was his family, friends and some great conversation. He was an entrepreneur in the best sense of the word. A loving husband, father, friend and master storyteller. George is survived by his wife and best friend of 50 years, Jamie Porter Matanovich, his son, Michael, daughter, Pamela and numerous nieces and nephews whom he adored. George was preceded in death by his parents, Michael and Helen and his beautiful sisters, Nada Matanovich Peterson and Mimi Matanovich Brophy. A Celebration of Life will be held at Christ Church of the Ascension on October 26th at 11am, 4015 East Lincoln Drive. In lieu of flowers, please send donations to the Board of Visitors 6245 North 24th Parkway, Suite 110 Phoenix, Arizona 85016 or Christ Church of the Ascension at 4015 East Lincoln Drive Paradise Valley, Arizona 85253. Arrangements entrusted to Whitney & Murphy Funeral Home.

Offer Hugs From Home Condolence for the family of MATANOVICH, GEORGE MICHAEL