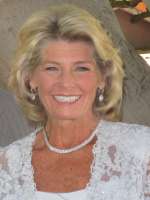 Kathleen (Kathy) L. Maxwell, 63, of Paradise Valley, died of sarcoma cancer on Friday, December 14, 2012 at Hospice of the Valley’s Ryan House on the campus of St. Joseph’s Hospital in Phoenix. She was born September 1949 in Evanston, Illinois, the daughter of the late John A. and Jean C. Lynch.

She was preceded in death by her parents, John A. and Jean C. Lynch of Scottsdale and her brother, Timothy.

In November 1974, Kathy was united in marriage to Roger Maxwell in Scottsdale. Twenty one years later in 1995, Kathy and Roger founded In Celebration of Golf, a unique golf retail experience in Scottsdale. As the visionary and founding partner, Kathy was instrumental in growing the retail business into one of the country’s finest golf retail concepts. She took great pride and delight in her role as buyer for the Celebration’s numerous locations throughout the West Coast. Kathy’s class, personality and business savvy helped distinguish the company from its competitors. In May 2009, Kathy received one of her greatest compliments from author George Whalin, who paid tribute to In Celebration of Golf in his book “Retail Superstars: Inside the 25 Best Independent Stores in America.”

Since she was diagnosed with sarcoma cancer in 2009, Kathy continued to amaze doctors with her gallant strength, courage and unwavering positive outlook. Family and faith were not only her passion, but also her source of strength until the time of her death, where she was surrounded by both.

Kathy was known as the consummate host, opening up their home to entertain friends and family for every occasion. She touched many lives with her beautiful spirit and beaming smile. Her immense generosity was underscored by her belief that giving was always from the heart rather than for public recognition. She will be remembered for her love of holidays and relishing in the joy of every holiday season.

The only thing Kathy loved more than family was a good novel. Today, as her family closes the final chapter on Kathy’s personal history, they celebrate the story of her life.

Funeral Mass will be at 10:00 a.m., Wednesday, December 19 at Blessed Sacrament Catholic Church, 11300 N 64th St., Scottsdale, AZ 85254. She will be laid to rest at St. Francis Catholic Cemetery. In lieu of flowers, memorial contributions may be made to the Department of Surgery at John’s Hopkins Hospital, Barrow Neurological Institute at St. Joseph’s Hospital and Medical Center and Hospice of the Valley, three institutions that were committed to improving Kathy’s life by providing excellent care.

Offer Hugs From Home Condolence for the family of MAXWELL, KATHLEEN L.