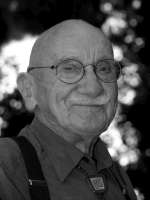 Derald was born in Cozad, Nebraska to a family with roots firmly planted in the fertile land of the Platte River Valley. He attended Cozad High, excelled in his studies, and played trumpet in the band. During World War II he enlisted in the Navy and served to the end of hostilities. Derald attended the University of Nebraska, Lincoln on the GI Bill and distinguished himself as a scholar, Golden Gloves boxer, hence “Iron Duke,” and, president of Delta Upsilon fraternity. He then attended the University of Nebraska Medical School, Omaha followed by three years of psychiatric residency.

Derald and his wife, Elizabeth (Betty), and their four children moved southwest to Arizona in 1959. The family settled in the Arcadia area in the shadow of Camelback Mountain. He established a practice in Phoenix during a dynamic period of growth and development for the broader medical community. Along with his commitment to his patients, he supported both colleagues and students with his time, therapeutic acumen, and sage advice. He took great satisfaction in his contribution to the health and well being of his patients and through them, his community. He retired after 33 years, a distinguished Fellow of the American Psychiatric Association.

Derald May was a man of remarkable talents, skills, and even more interests. He exhibited a strong work ethic and moral compass. His passion for education was reflected in his insatiable, life-long quest for knowledge. He loved music from compelling gospels to cool Pete Fountain and the swingin’ Big Bands. He and Betty could burn up the dance floor with peerless jitterbug moves. Building and creating were fulfilling hobbies. His shop was a carpenter’s dream and a plumber’s delight. He was a recycler ahead of his time holding onto everything: nuts, bolts, washers, screws, baling wire… There were always projects to be completed, contraptions to be designed and constructed, and repairs to be made. The best kind of sports fan, he was forever loyal to the Nebraska Cornhuskers and his hometown teams at ASU. Go Devils! He loved animals and delighted in nature – a beautiful sunrise, an extraordinary flower, or the bunny and quail families in the back yard. He loved camping, fishing, horseback riding, bicycling, motorcycles, sports cars, and there was just nothing better than riding on a John Deere tractor.

He loved Betty, his family, and his friends.  Derald loved life. We will miss the hours of conversation, wise counsel, the infectious laugh, and the boundless care and love that defined our lives with him. Derald left the world a better place. We are proud to be the May Family.

In lieu of flowers, please contribute to the USO, Salvation Army, Hospice of the Valley, or a charity of your choice.

Offer Hugs From Home Condolence for the family of MAY, DERALD GLEN, M.D.