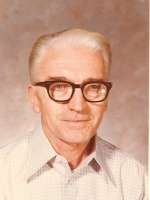 Passed away on Saturday, October 9, 2010 at the age of 96. He was born September 10, 1914 in Worcester, MA. Francis graduated from Providence College in 1937. He entered the United States Army in December, 1940 and retired in April, 1961. After his proud military service, Frank became an elementary school teacher at Kiva Elementary School in Scottsdale. He taught at Kiva until his retirement in 1983. Frank was a devoted and loving husband, father, grandfather and friend. He is survived by his son William (Margaret) and grandson Cormac. Visitation will be from 6:00-9:00 pm with a Scripture Reading at 7:00 pm, Tuesday evening, October 12th , at Whitney & Murphy Funeral Home, 4800 E. Indian School Road. Funeral Mass will be at 10:30 am, Wednesday, October 13, at Saint Theresa Catholic Church, 5045 E. Thomas Road. Interment will follow at St. Francis Catholic Cemetery. In lieu of flowers, donations may be made to the Saint Vincent De Paul Society, 5045 E. Thomas Road, Phoenix, AZ 85018.

Offer Hugs From Home Condolence for the family of MCCARTHY, FRANCIS JOSEPH