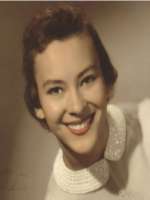 Betty McCarty, 77, of Phoenix, Arizona passed away on Wednesday, October 23, 2013. She was born to the late Joseph and Ethel Monteilh, December 3, 1935, in Oklahoma. Betty attended St. Mary’s High School in 1953. She married the late Leon McCarty, in 1958 and they lived together in Phoenix, AZ. Betty was a godly wife, daughter, sister, mother and friend in every sense of the word. She was a businesswoman and real-estate broker who actively worked from 1976 to the point of her death. Betty was heavily-involved in the community and donated to multiple charities worldwide. She was also an active member of St. Agnes Catholic Church. Betty was a saint to many and touched the hearts of everyone she met. She is survived by her daughter, Kristy, her son, Sean, her brothers and sisters: Leroy, Charles, Gene, Shirley, Paul, Louis, Richard, Evangeline, Larry, Ray and Diane. She is also survived by her thirteen grandchildren. Visitation is Sunday, October 27th from 4-9 p.m. with a Scripture Service at 7:00 p.m. in the Chapel of Whitney & Murphy Funeral Home, 4800 E. Indian School Rd. Funeral Mass is on Monday, October 28th  at 10:00 a.m. at St. Agnes Catholic Church, 1954 N. 24th St. Interment will follow at St. Francis Cemetery.

Offer Hugs From Home Condolence for the family of McCARTY, BETTY J.