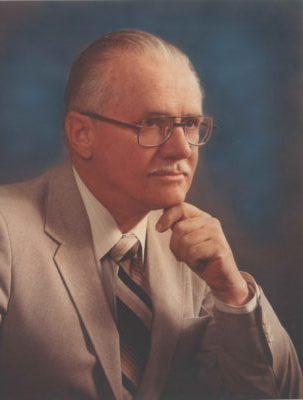 Passed away on December 11, 2016. He was born in Fort Dodge, Iowa on October 13, 1926 to Francis and Catherine (Coady) McCarville. After graduating from Moorland High School in 1944 he traveled to Phoenix, Arizona to attend Arizona State College which is now ASU. John enlisted in the army in 1945 and served until 1947 as a lab technician at Fort Sam, Houston, Texas. He left the army to use his GI bill to attend medical school. He returned to Arizona State College for pre-med and graduated from Creighton University in 1951. John married Margaret (Yetmar) McCarville and they had 8 children together. He opened up his general practice at the Wagon Wheel shopping center in Phoenix in 1952 when general practitioners did everything. He had an X-Ray machine, laboratory and assisted in surgeries at the local hospitals and delivered over 500 babies. He was President of the Civitan Club and active in the Knights of Columbus and became an accomplished ballroom dancer. In 1960 he received the Distinguished Community Service Award from the Maricopa Medical Society for alerting the nation on the dangers of suffocation from plastic bags. John served in the Arizona Army National Guard as Flight Surgeon becoming one of the busiest First Class Aviation Medical Examiners in the South West until retiring in 2014 at the age of 88. As James Medlock, Captain of US Airway (retired) described him “He truly is a great man of the old school. He values people, he is unselfish, his word is his life. He knows all about hard work and the struggles of life for the common man. He doesn’t see dollar signs he sees inside to our spirit. He is a very uplifting and positive individual, lifting the spirit of all who come into contact with him. He is a physician icon in the Valley of the Sun.” John is survived by his second wife of 45 years Patricia (Oakley) McCarville, sons Patrick (Theresa), Thomas (Marceline), Mark (Leslie), Frank (Cathy Ann), William (Lisa) and daughters Mary Michele Gladden (Thomas), Zita Morgan (Danny), Annie Crawford (Stewart) and step daughters Janet Marsolo (Carlo) and Pamela Bailey, 19 grandchildren and 16 great grandchildren. A visitation will be on Tuesday, December 13 from 5:00-8:00 P.M., at Whitney & Murphy Funeral Home, 4800 E. Indian School Road, Phoenix, Arizona 85018. Funeral Mass will be celebrated at 1:00 P.M., Wednesday, December 14, at St. Thomas the Apostle Catholic Church, 2312 E. Campbell Avenue, Phoenix, Arizona 85016. Interment will take place with Honors on Friday, December 16, at 10:00 A.M. at The National Memorial Cemetery of Arizona, 23029 N. Cave Creek Rd, Phoenix, Arizona

Offer Hugs From Home Condolence for the family of MCCARVILLE, JOHN EDWARD “JACK”