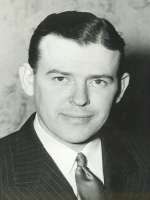 100, passed away peacefully on July 10, 2011 with family and friends at his bedside. Crawford was born on July 8, 1911 to Charles Crawford McClue Sr. and June McClue in Little Rock, Arkansas. Crawford met his beloved wife to be, Virginia May Holt in May 1941 and they were married on January 23, 1942. He was a dedicated and loving Father and Husband and lived an amazing and exciting life. He was a Lieutenant Commander U.S. Naval Aviator veteran in World War II. One of his many accomplishments he was so proud of was being the founder of the Ahwatukee Foothills Concert Band, his nickname was Bandad. He was very out-going and friendly with a great sense of humor; he was an inspiration to his family and friends for his love of people and life which he lived to its fullest. He loved music, playing golf, fishing and sports. He was preceded in death by his parents, wife, sister, June McClue (Davis), brother, Sidney G. McClue Sr., two nieces and four nephews. He is survived by his son Michael Crawford McClue and one niece and four nephews. He will be deeply and lovingly missed by all of those whose lives he touched and we thank him for sharing his life with us. Contributions may be made to the National Kidney Foundation of Northwest Texas at 214-351-2393.

Offer Hugs From Home Condolence for the family of MCCLUE JR., CHARLES CRAWFORD