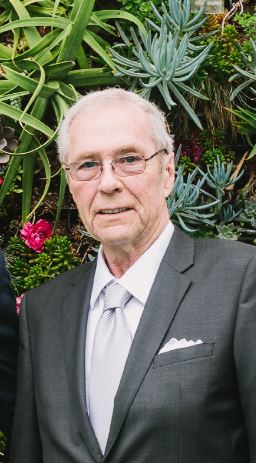 Robert McGaughey, known to family and friends as Bob, passed away peacefully at home on July 29, 2022, ending his twelve-year journey with lung cancer. He was 80 years old.

Bob was born to Milford William McGaughey and Ruth Chase McGaughey on September 21, 1941 in Minneapolis, Minnesota.

After graduation from Augustana, Bob completed his Master’s degree at the University of Colorado, Boulder, Colorado under the mentorship of Joseph C. Daniel and his PhD at the Worcester Foundation and Boston University under the mentorship of M. C. Chang. Bob then went to England and worked at the ARC Unit for Reproduction and Biochemistry in Cambridge, England with Chris Polge and Ian Wilmot. On returning to the United States in 1970 he completed a one-year postdoctoral appointment at the University of Colorado.

In the fall of 1971 Bob accepted a tenure track appointment in the Zoology Department at Arizona State University, in Tempe, Arizona, where he taught, obtained grants, did research, published papers and book chapters, mentored students and served the Zoology department and university on many committees until his retirement in 2004.

In his years of studies and research Bob worked with eggs and embryos of many species of mammals. This experience was crucial to his work as a consulting embryologist. In 1984 Bob began consulting as lab director and embryologist for the Arizona Center for Fertility Studies established by Jay S. Nemiro, MD. During their long and fruitful association Jay and Bob assisted many couples in achieving their dreams of having children. By the time Jay and Bob retired from this work several thousand babies had been welcomed into loving families.

In the fall of 2018 Bob was recognized by Augustana University as a Distinguished Alumnus for his contributions to reproductive sciences and pioneering work in Assisted Reproductive Technology.

Bob was preceded in death by his parents, Mel and Ruth McGaughey.  His is survived by his beloved wife of thirty-three years, Barbara, his much-loved son, Matthew and daughter-in-law Raya, brothers Richard (Loree Ann), Ronald (Mary Jane)
and many nieces and nephews.

In lieu of flowers, Bob requests that you consider making a donation to a cause or charity close to your heart.

Offer Hugs From Home Condolence for the family of McGAUGHEY, ROBERT WILLIAM