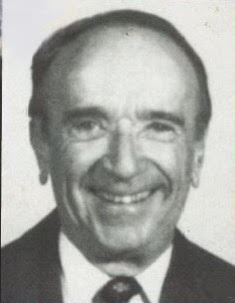 After celebrating his 92nd birthday on April 18, 2020, Jerry passed from this world. He was preceded in death by his loving daughter Shannon. He leaves Patricia, his wife of 69 years, his sons Michael and Kevin, his daughter-in-law Eileen, son-in-law Bill Fee, grandchildren Katlin, Shea, Katie (Morgan), Erin (Greg), Megan and Dillon, and great grandsons, Jax, Cash and Cooper.

Jerry was raised on a farm in the Illinois town of Jacksonville and was one of eight children of William and Ida McGrath. He is survived by his brother Jim of Springfield Illinois, and many nieces and nephews. After a short college basketball experience in Texas, Jerry returned to Illinois and joined the U.S Marine Corp. In the Corp, he served as a meteorologist and with World War II concluding, the Marines provided Jerry a tour of the States including North Carolina, Michigan, New Jersey (with an introduction to spaghetti and Yankee Stadium), and his preferred destination, El Toro in the north county of San Diego.

Returning home after his tour of duty, he met a woman in the St. Louis bus station. She was traveling from college to visit a friend in Jerry’s hometown, and that’s where “Jake” met Pat Springer. Moving to Pat’s hometown of Phoenix, Jerry enrolled at Arizona State College to study accounting, and went to work at Safeway, putting his hometown A&P skills to work as a cashier.

His marriage to Pat coincided with his graduation from ASU with an accounting degree, then the birth of his eldest dashed plans to go to law school. Instead, Jerry began a career of 65 years in public accounting, becoming a CPA in the 1950’s.

Jerry was a parishioner at St. Theresa Catholic Church and Our Lady of Perpetual Help, where he was a member of the Perpetual Devotion Society. He was a member of Arizona Country Club for more than 50 years, where he long maintained a single digit golf handicap. He served 3 terms on the Club’s Board of Directors and on the Greens Committee. Jerry was a Life Bird in the Phoenix Thunderbirds, having served the organization since the ‘60’s, including as the President of the Kiva Club and as a Life Member of the Year.,

Jerry practiced public accounting and played golf into his ‘90’s. He was a reader, and avidly followed the sporting world and stock market. In recent years he was a resident at the Beatitudes Campus with Pat. He was a loving husband, father, friend to many, and was a vital part of the lives of his grandchildren. A private burial has been arranged with the hope that a future Mass and Celebration of his Life may be held, pending a resolution of the existing health crisis. A spiritual person, Jerry would appreciate a prayer for Pat, his family and for one another.

Offer Hugs From Home Condolence for the family of McGRATH, GERALD W.