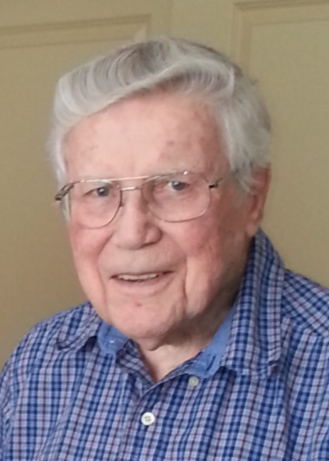 Robert (Bob) Philip McGuinness, 91, passed away peacefully on February 10. Bob was born in Pennsylvania to the late James and Wallburga McGuinness. In addition
to his parents he is proceeded in death by his daughter Linda and brothers; Thomas, Edward, Paul, Joseph and Leo. Bob will be deeply missed by his beloved wife of 71 years Angie;daughter Karen and two sons, Patrick and James; grandchildren Michelle, Russell, Joel, Jennifer, Laura, Erin, Devon, Ian and Damon; along with his great grandchildren. Bob served in the U.S. Navy during World War II and retired from Garrett Research. He was a long time parishioner and served
as an usher at St. Agnes Catholic Church. Bob had a love for oil painting and enjoyed going camping and fishing with the family. His summers were spent in Overgaard, AZ at their summer home. He will be greatly missed!! The family wishes to thank the caring staff at Generations at Agritopia assisted living. Services will be held on Thursday, February 15, 2018 at 10:30 A.M. at St. Agnes Catholic Church, 1954 N. 24th St. Phoenix, AZ. Directly following the services, the burial will be at St. Francis Cemetery, 2033 N. 48th St. Phoenix, AZ. Arrangements entrusted to Whitney & Murphy Funeral Home.

Offer Hugs From Home Condolence for the family of McGuinness, Robert (Bob) Philip