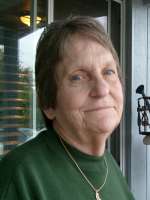 Marcia Rae (Trunkey) McHaney was born December 18, 1939 to Neil and Nora Trunkey in Waterloo, Iowa.  She began her career as a bank teller in Iowa.  After wintering in Arizona with her parents for several years, she moved to Phoenix and began working at The Arizona Bank in 1964.  She then worked as an EMT and receptionist in the Emergency Departments at John C. Lincoln Hospital and Phoenix Baptist Hospital.  Prior to her retirement, she worked in the bakery and floral departments at Safeway.  She was also active in service at Christ Church Lutheran as a kitchen helper for Celebrate Recovery, a ministry very near and dear to her heart.  She is preceded in death by her sister Maxine and Maxine’s son Joel.  She is survived by her daughter Michelle (McHaney) Robinson and Michelle’s husband Robbie, her grandchildren Sarah, Taylor, and Wayne.  Her brother Charles ‘Chuck’ Trunkey and his sons Adam and Christopher Trunkey and their families and John Pearson (Maxine’s son) and his family.  We love you mom and grandma, thank you for always being there for us. Memorial Service will be held on Saturday, March 9, 2013 at 3:00 pm at Whitney & Murphy Funeral Home, 4800 E. Indian School Road, Phoenix.

In lieu of flowers, the family asks that donations be given to one of Marcia’s favorite ministries:   Celebrate Recovery, Christ Church Lutheran,  3901 E. Indian School Rd., Phoenix, AZ 85018

Offer Hugs From Home Condolence for the family of MCHANEY, MARCIA RAE