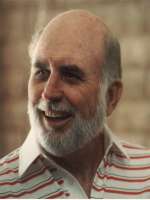 Bob McIndoo passed away peacefully on October 17, 2013.  He was 88 years old, having been born on December 26, 1924.  A Phoenix native, Bob was a graduate of North Phoenix High School and attended Tempe Normal School for the Arizona Territory, later to become Arizona State University.  Bob served in the US Navy from May 1943 until February 1946, serving aboard the USS Anchor in the South Pacific.  Bob returned from the war to marry Lyda Branham in 1947.  This was also the year he joined the City of Phoenix Fire Department.  He served on the Department for 39 years, retiring in 1986 at the rank of Captain.  Bob was preceded in death by his wife Lyda, his second wife Joyce (Nickerson), his son Larry, and his daughter Patty Moriarity.  He is survived by his sisters Norma Garrity and Carol Houston, his daughter Lynn Conklin, his son Steve, his three step sons Bruce Nickerson, Larry Nickerson, Tom Nickerson, and many nieces, nephews, grandchildren and great-grandchildren.  A Memorial Service will be held at Whitney & Murphy Funeral Home located at 4800 E. Indian School Rd., on Wednesday, October 23, 2013 at 9:30 A.M.