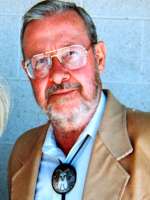 John J. McInnis of Prescott, AZ, died on May 11, 2012. He was born in Eau Claire, WI to Marcellus and Margaret (Trudelle) McInnis on March 20, 1935. He attended St. Patrick’s School and graduated from Regis High School in 1953. Following his service in the Air Force, he attended the University of Wisconsin, where he studied Accounting. John moved to Arizona in 1962. He worked for the office of the Arizona State Auditor General. He then began to work for Anderson Clayton Corporation in their Accounting Department, where he remained for many years. When he retired, he moved to Prescott, AZ. A devoted Catholic, John attended daily Mass. He was a member of the American Legion, loved going to auctions, hunting and visiting his family and friends.
John was survived by his sister-in-law, Janice McInnis of Richmond, VA, fifteen nieces and nephews, twenty-three great nieces and nephews and many friends. He was preceded in death by his parents, his two brothers, James and Roderick McInnis, two sisters, Mary J. Hauser and Peggy J. O’Meara and a niece, Jill McInnis. A Memorial Mass will be celebrated at 10am at St. Gregory Catholic Church, Phoenix, on May 22, 2012. A Memorial Mass will also be celebrated in Prescott at Sacred Heart Parish at 11am on May 23, 2012. Burial will be in Eau Claire, WI at St. Patrick’s Cemetery on Saturday, May 26, 2012. In lieu of flowers, memorials may be sent to the Society of St. Vincent de Paul – St. Gregory Council at 3424 18th Ave, Phoenix, AZ 85015.

Offer Hugs From Home Condolence for the family of MCINNIS, JOHN JOSEPH