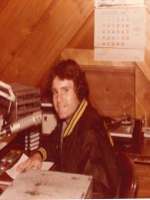 54, of Phoenix, AZ passed away  after a courageous two year battle with cancer in the early morning on Sunday, October 27 surrounded at home by his wife and children.  He was born to James McIntyre and Lois Zink in Lafayette, Indiana.  He was preceded in death by both of his parents. Joe married his college sweetheart Ann in 1986, and they lived in Phoenix, AZ with their children Meghan, Kelcy, Joel, and Brian.  Joe was a fixture in valley radio broadcasting since 1983 and touched many, many lives with his constant humor and love of life.  He is survived by wife Ann; children Meghan, Kelcy, Joel, and Brian; grandson Kieran; brothers James (Julie), Dave (Nancy), Steve, Rich and Robert (deceased); numerous nieces and nephews, and a multitude of beloved in-laws.  Visitation will be held from 4-6pm, Sunday, November 3, 2013 at Whitney & Murphy Funeral Home, 4800 E. Indian School Road, Phoenix.  Funeral Mass will be at 10am, Monday, November 4, at St. Theresa Catholic Church, 5045 E. Thomas Road, Phoenix, AZ 85018 with a reception to follow immediately after the service.  The family requests that any contributions be made to Hospice of the Valley, 1510 E. Flower Street, Phoenix, AZ 85014 and St. Theresa’s Pastoral Care Ministry.