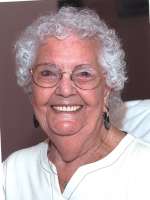 passed away on February 27, 2011 at the age of 91 in Phoenix, AZ. She was born July 30, 1919 in Big Timber, Montana on a ranch in a log cabin to Gary E. Anderson and Nellie Laura (Gillispie) Anderson. She moved with her family to Illinois where she met and married Oliver E. McKee on January 4, 1936 in Colchester. In 1983 she moved to Phoenix, AZ where she served as President of Phoenix Manor Activities Committee for five years. Survived by 11 grandchildren, 25 great-grandchildren, 4 great, great-grandchildren, one nephew, Merlyn Knowles whom she raised, daughter-in-law, Janet McKee, and son-in-law Leonard Ottis. She was preceded in death by her husband, son, Larry McKee, two daughters, Nedra Ottis & Janice Menke, her parents, sisters, Frances Chaney, Louella Cooper and Virginia Petty and son-in-law Joe Menke. Graveside Service will be at 9:30am, Friday, March 4th, at the National Memorial Cemetery of AZ, 23029 N. Cave Creek Rd., Phoenix.

Offer Hugs From Home Condolence for the family of MCKEE, MARIE ALLYNE