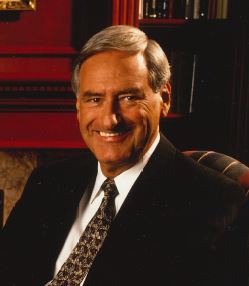 Robert “Bob” Harley McKee, 90 years, passed away on February 23, 2022 in the Phoenix home he shared with his devoted wife of 44 years, Mary Ellen.

Bob was born on October 26, 1931 in Hamilton, MO in the home behind the service station owned by his grandfather and run by his father.

As an only child, he attended elementary and high school in Cameron, MO, prior to enrolling in William Jewell College in Liberty, MO and majoring in Economics. Bob put in many long hours delivering fuel, with an old tank wagon. On many cold dark nights, he recalled seeing lights on in all the houses on Christmas Eve, and wishing he was home.

With a good education and a strong work ethic under his belt, he became the ultimate entrepreneur, eventually moving to Arizona in 1969.

Bob became a dynamic, independent gasoline marketer developing one of the largest independent chains of self-serve gasoline stations in the Southwest. He originated the concept of convenience stores, with one stop for the purchase of groceries and gas.

He then branched out into banking, procuring Ralston Bank in Nebraska which he sold to Norwest Bank which then became Wells Fargo Bank.

He thrived on taking chances and could play a waiting game, unless there was a business opportunity that he couldn’t resist and then he would just buy it! Bob once described his successful career as one of “dodging bullets.”

He and Mary Ellen enjoyed the challenge of developing and operating, Hidden Springs Ranch one of the finest manicured horse facilities in Peeples Valley, Arizona. Bob truly enjoyed betting on the “Ponies” and poker with the boys in Del Mar. He enjoyed summers in Idaho floating around on his and Mary Ellen’s boats, “Old man river and Me and Bobby McKee” and participating in the follies around the “Tree Bar.”

Bob was preceded in death by his parents: Robert Doak and Helen Williams McKee, 2 precious grandsons, mother of his children: Peggy Kelly and a brother-in-law: Richard Poulsen.

He also leaves behind the devoted staff of Torey Pines Club Corporation and Hidden Springs Ranch, many who have been with Bob and Mary Ellen for over 33 years.

We are all so grateful for all of Bob’s caregivers for so many years and Hospice of the Valley in his final days.

A private family service will be held. A Celebration of Bob’s life will be forthcoming.

To honor Bob’s memory memorials in his name could be directed to: The Boys and Girls Club of Greater Scottsdale Foundation, 10533 East Lakeview Drive, Scottsdale, AZ 85258 or to The Heard Museum, 2301 North Central Avenue, Phoenix, AZ 85004.

Offer Hugs From Home Condolence for the family of MCKEE, ROBERT “BOB” HARLEY