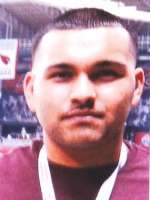 26, passed away on November 24, 2013 to be with our Heavenly Father, joined now also with the love of his life Patricia Castaneda.

Offer Hugs From Home Condolence for the family of MEDINA, JOSEPH CHRISTOPHER