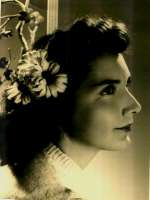 Frances Emmeline (DIXIE) Melby passed away on May 22, 2013 in Molalla, Oregon where she had been living with her son and his family.  She was 93.  Dixie was born and raised in Globe, Arizona.  She earned a BA in teaching at ASU (when it was a Teachers College) and married Bill Melby in 1942.  Bill subsequently had a long career as an officer in the Marine Corps.  Dixie often described their life together as “a wonderful adventure-more exciting than a girl from Globe could ever have imagined”.  Highlights included 3 years in Madrid, Spain where Bill was the Assistant Naval Attaché

and Dixie  (because of her fluent Spanish) was the embassy’s unofficial hostess/tour guide for the US Navy whenever it made port in Spain.  During this time, Dixie and three other American service wives made a road trip to Italy at a time (early fifties) when few women in Europe drove at all.  Their adventures were more than worthy of a Hollywood script.  A few years later Dixie found herself living in Chinhae, South Korea.  Here her teaching background became an asset when she took over as the only teacher in a 2 room school until the regular teacher arrived.  Dixie went on to teach English Conversation at a Korean middle school and at the South Korean Naval Academy.  Before Bill retired, he was stationed on Treasure Island in San Francisco.  There Dixie was awarded the title of “First Lady of The Fleet” for her tireless volunteer work on behalf of Navy families.  Perhaps Dixie’s favorite duty station was Newport, RI where her love of history and antique hunting happily coincided.  After Bill retired from the Marine Corps, the family settled in Phoenix.  Dixie soon joined the Sodality at St. Thomas Catholic Church and then went on to become a lector for the parish.  She joined the Heard Museum’s Guild in 1981, became a guide in 1982 and served as Guild President from 1989-1990.  Her work with the Heard often involved visiting local schools, bringing to life the history of the southwestern native people.  Dixie took real pride in being an educator.  She loved that moment when a child discovered that they could “do it”.  Her membership in the May Flower Society gave her another way to use her teaching skills, this time by providing workbooks about the Pilgrims to elementary schools.   Most recently Dixie found fulfillment as a volunteer interpreter with the Mission of Mercy’s medical team.  Dixie is survived by her four children, four grandchildren and many nieces and nephews. Her children and grandchildren consider it an honor to have had her as a mother and grandmother.  A Vigil Service will be held from 6:00-8:00pm, Sunday, June 2, 2013 at Whitney & Murphy Funeral Home, 4800 E. Indian School Road, Phoenix. Funeral Mass will be held at 10:30am, Monday, June 3, 2013 at St. Thomas the Apostle Catholic Church, 2312 E. Campbell Avenue, Phoenix.  In lieu of flowers Dixie would have preferred a donation to the Mission of Mercy (www.amissionofmercy.org/arizona) or a charity of your choice.

Offer Hugs From Home Condolence for the family of MELBY, FRANCES EMMELINE (DIXIE)