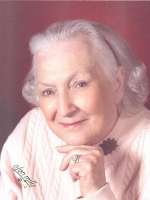 Barbara N. Meredith, 86, passed away January 17. 2012, at her beloved home. Barbara was born on November 2, 1925, in Independence, Iowa. She graduated from Stephen College and went on to the University of Iowa, where she was a Phi Beta Kappa Society member. Barbara moved to Phoenix in 1964 where she met and married Howard L. Meredith and merged two families into one. She is survived by her son William Barwick, stepson William Meredith, stepdaughter Diana Fowler, seven grandchildren and four great-grandchildren, along with friends and neighbors that she considered to be family. Funeral Service will be held Saturday, January 28, 2012 at 11:00 A.M., at Whitney & Murphy Funeral Home, 4800 E. Indian School Rd., Phoenix.

Offer Hugs From Home Condolence for the family of MEREDITH, BARBARA NAN