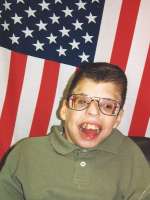 On November 19, 2009 one of God’s little angels joined him in Heaven. Nicklaus Alfano Metzger was born October 18, 1983 in Phoenix, Arizona.
Nicklaus was at Phoenix Children’s Hospital ICU where he lost his battle with pneumonia.
Nicklaus was one of God’s special children that conquered many health issues and surgeries over the years. Despite all his challenges he became his own adorable and happy person. Nicklaus’ expressions were priceless and he also learned sign language which enabled him to communicate love and happiness to all of those he touched.
Nicklaus enjoyed going for long drives and riding the train at McCormick Ranch Railroad Park as well as his favorite sport bowling. He always looked forward to going to school at the Navigator Program and his favorite subject was music and playing the drums.
Nicklaus touched the hearts of everyone who knew him and opened their eyes to true unconditional love and caring. He will be sadly missed by all of his loved ones but Heaven will be blessed with the bright light of yet another Special Angel.
You will never be forgotten Nick, only remembered for that one in a million smile!
Nicklaus is survived by his adoring mother Antoinette and father Ronald Metzger, Step-father Joe Hrudka, Grandmothers Grace Alfano of Wyandotte, Michigan and Rosalie Metzger of Reno, Nevada and many aunts, uncles and cousins.
Nicklaus and his family wish to express a special thanks to his many caregivers over the years at Desert Cove and especially his most treasured friend Melissa Riley who always went above and beyond in caring for him.
Visitation will be Monday, November 23rd from 5:00P.M.-8:00P.M. at Whitney & Murphy Funeral Home, 4800 E. Indian School Rd, Phoenix, Arizona. Rosary will be at 7:00 P.M.
Funeral Mass will be Tuesday, November 24th at 10:00 A.M. at Saint Theresa Catholic Church at 5045 E. Thomas Rd, Phoenix, Arizona.
In lieu of flowers his family request donations in his honor to be given to The Center for Habilitation, 215 W. Lodge, Tempe, Arizona, 85283.

Offer Hugs From Home Condolence for the family of METZGER, NICKLAUS