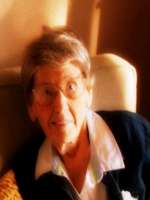 Esther Mills passed away in Phoenix on February 28th, 2013. She was born on December 1st, 1926 to Damasius (Nick) and Martha Bluma in a rural area of Portage County Wisconsin. She moved to Phoenix in her thirties and has resided there since. Esther was an amazing seamstress, creating beautiful pieces came naturally to her, as she was a truly gifted artist. She kept herself busy her entire life, and there was always at least one project in the works. Esther had a wonderful sense of humor and incredible wit. She was very bright and closely followed politics, as she cared greatly about current events and their effect on our world. She was very active in her church (Saint Thomas the Apostle) and a member of the sodalidy for many years. Esther was extremely devoted to her family and friends. She was a loving mother to a son and daughter, and a wonderful grandmother and great-grandmother. Her guidance and support has graced many and she will be dearly missed. She is preceded in death by her husband, Roman Mills and daughter, Ann Mills. She is survived by her son, Michael Mills, grandchildren, Hilary Alonzo and Jeff Mills and great-grandchildren, Simon, Finn, Adeline, Jack, and Eloise. Visitation/Memorial will be held from 6-8pm with a Rosary at 7pm Thursday, March 7, at Whitney & Murphy Funeral Home, 4800 E. Indian School Road, Phoenix 85018. A Graveside Service will be held at 9am, Friday, March 8, at the National Memorial Cemetery of AZ, 23029 N. Cave Creek Road, Phoenix.

Offer Hugs From Home Condolence for the family of MILLS, ESTHER ALICE