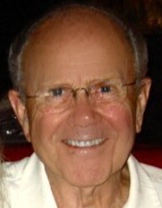 Charles E. “Chuck” Misfeldt, 82, of Scottsdale passed away on Monday December 15, 2014 surrounded by his loving family. He was the son of Delia “Dee Dee” and Charles Misfeldt.

Chuck attended Hoover High School in Glendale, California. After four years of service in the Marines as a pilot, he moved to Arizona along with his new bride Janice and enrolled at ASU to major in industrial engineering. He was a member of the Delta Sigma Phi Fraternity where he made many lifelong friends. In June of 1961 during his senior year at ASU, he opened his first restaurant near Rural and Apache roads called the Varsity Inn Pizza Parlor. He went on to develop numerous restaurant concepts across the mid-west and was owner of the Top Shelf Mexican Cantina’s, First Watch of Arizona breakfast restaurants and Gallagher’s Sports Grills here in the Valley.

Predeceased by his parents and his sister Jo Ann, he is survived by his beautiful wife of 56 years, Janice, his three children, Beth and Jeff Rons, Brian and Renee Misfeldt and Jennifer and Darren Mills along with his three adored grandchildren, Hailey Rons, Jake and Brogan Mills, his step-sister Linda and Robert Avalone and his numerous nieces/nephews.

In lieu of flowers donations may be made to:

Offer Hugs From Home Condolence for the family of MISFELDT, CHARLES