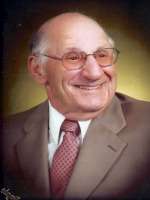 Anis “Mitch” Mitchell passed away on December 16, 2012 at home with his family by his side. He was a beloved son, brother, husband, father, grandfather, uncle and lifelong friend to so many.

Mitch was born in Superior, Arizona on May 16, 1927. He attended Roosevelt Grammar School and was president of his 8th grade class. While a student at Superior High School he was president of his sophomore and senior class and the Student Body. He was also a member of the National Honor Society and an Eagle Scout. Mitch loved sports, and he lettered in football, basketball and baseball and served as president of the Letterman’s Club. He has maintained lifelong friendships with his fellow teammates, opposing teammates, the most of the kids he grew up with in Superior.

He was drafted to the army in 1945 and served two years in Japan. He was with the US Eighth Army – Army of Occupation.

Upon his return from service Mitch attended University of Arizona, majoring in Finance, and belonged to the Delta Chi Fraternity and served as President of Alpha Kappa Pi and Yavapai Hall.

During the Korean War, Mitch served 30 months of hardship duty beginning May 15, 1950. He was stationed at the Port of Whittier Alaska and then in Sill, Oklahoma. He was honorably discharged in 1953 as a First Lieutenant.

He attended the University of Arizona law school in 1953 on the G.I. Bill where he served as the President of the student body. He received his LLB & JD in law in October, 1956.

Mitch’s legal career began at the Maricopa County Attorney’s office. He later held the position of Assistant City Attorney for Phoenix then opened a private practice. In addition to the thousand of clients he helped, he was always available for legal consultation with his friends, family and new acquaintances that needed his advice.

He married Mary Frances Bumsted December 31, 1960 and enjoyed a wonderful 47 years together until Mary Frances passed away in 2007.

Mitch was a lifelong Wildcat supporter – to put it mildly! He rarely missed an Arizona game, always knew the scores, the win/loss records, knew many of the athletes, and read media guides from cover to cover. He truly bled red and blue and wore his Arizona ball cap most days.

Mitch loved life and was very generous throughout. He was greatly influenced by his mother, Nazha Tibshraeny, who taught him to live his life with fairness, compassion, integrity, equality and love for his fellow man. Mitch and his wife, Frances both passed on these traits to all who followed.

He touched many. His generosity encompassed sage advice to those that asked, emotional support for those in need, donations to every group that needed help and legal advice for those in crisis. His lessons will live in the hearts of all he helped.

Offer Hugs From Home Condolence for the family of MITCHELL, ANIS “MITCH”