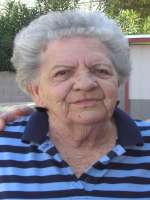 Lois Ruth Moeller passed away on January 8, 2013. Lois was born on July 17, 1928 in Sulpher, Oklahoma. She and her seven brothers and sisters attended the Chilaco Indian Boarding School located in Arkansas City, Kansas. Lois took great pride in her Chickasaw Indian heritage.  She and her future Husband, Lloyd, met at the Kansas City Beauty School where Lloyd was an instructor and she a student. They married and moved to their first and only house in Phoenix in 1952. Together they had three children of whom they were most proud; Steven “Chris” (deceased 11/24/2012), Ron and Janet (John), and four grandchildren- Shawn (Heather), Briana (Phil), Shauna (Noah) and Patrick (Cory).  She is also survived by three great grandchildren; Savannah, Holly and Elle. Lois took great pleasure in her family, friends and life. Graveside Service will be held at National Memorial Cemetery of Arizona, 23029 N. Cave Creek Road, Phoenix, on Monday, January 14th at 12:30 in the afternoon.

Offer Hugs From Home Condolence for the family of MOELLER, LOIS RUTH