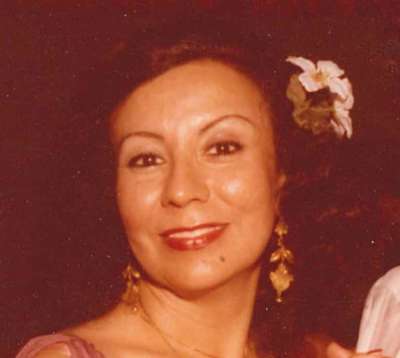 80, of Phoenix, Arizona passed away at her home on Tuesday, May 13, 2014.  She was an only child born to the late Pedro Lopez and Maria Concepcion Alcala on May 25, 1933, in Guadalajara Mexico.  Dolores came to this country in 1951 right after graduating High School and married Gene Monteilh in 1962.  Dolores was a godly wife, daughter, mother and friend in every sense of the word.  She was a devoted mother, homemaker, and style setter who took great pride in her appearance and opened her door to whomever was in need.  Dolores touched the hearts of everyone she met, showered her love so freely, and became a loving mother to so many unrelated individuals.  Dolores was also an active member of St. Mark Catholic Church.  Dolores was preceded in death by her daughters Cecilia Dominguez and Columba Dominguez. She is survived by her husband Gene, her five sons Jody, Jeff, Martin, Gene, Jr., Tony and her granddaughter Alejandra.  Visitation is Tuesday, May 20th from 5-9pm with a Scripture Service at 7pm at Whitney & Murphy Funeral Home, 4800 E. Indian School Road.  Funeral Mass will be at 10:00am, Wednesday, May 21st, at St. Agnes Catholic Church, 1954 N. 24th Street, Phoenix.  Interment will follow at St. Francis Catholic Cemetery.  The family wishes to express their sincerest thanks to the angels at Sage Hospice, especially Jeannine, Shelly, Jennifer and Cheryl.

Offer Hugs From Home Condolence for the family of MONTEILH, DOLORES