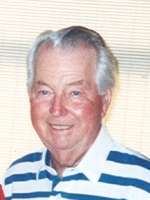 John Lewis Moore, 90, passed way peacefully on December 6, 2009 with his family at his bedside. He was born and raised in Dixon, Illinois and spent many summers there after his retirement. He attended St. Viator’s College in Kankakee, Illinois. In l942 he married Anna Marie Devine. She preceded him in death in l989. He achieved the rank of Captain in the Army Air Corps and was awarded the Air Medal for devotion to duty and exceptional flying ability. In l947 he moved with his young family to Phoenix where he was involved in the liquor industry until his retirement from United Liquor Company as a branch manager in l987. He is also preceded in death by his son Michael Joseph. Survivors include his wife Charlene of Dixon, daughter and son-in-law, Maureen and Jack LaSota of Phoenix; son, John Patrick Moore of Phoenix; son and daughter-in-law, Lewis Kevin and Mona Moore of Burbank, CA; several grandchildren and great-grandchildren. Visitation will be from 6:00-8:00 pm, with a Rosary at 7:00 pm, Thursday, December 10, 2009 at Whitney & Murphy Funeral Home, 4800 E. Indian School Road. Funeral Mass will be at 3:00 pm, Friday, December 11, 2009 at Brophy Chapel, 4701 N. Central Avenue, Phoenix. In lieu of flowers, donations can be made in his memory to Hospice of the Valley, 1510 E. Flower Street, Phoenix, AZ 85014.

Offer Hugs From Home Condolence for the family of MOORE, JOHN LEWIS