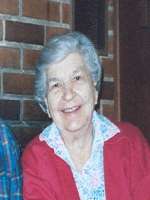 Dec.18, 1925 – Oct. 11, 2010
She was a native Arizonan born in Phoenix to Clyde and Julia Threlkeld. Jan graduated from North Phoenix High School, attended the University of Arizona and graduated from Arizona State University. Jan was a national officer and 66 year member of Pi Beta Phi
Fraternity. She married Thomas Moore on November 4, 1944 in New York City. She went on to raise two children, Julie and Mike. Jan’s life followed many worthwhile pursuits in addition to her devotion to her family. Jan was a founding member of Christ Church of the Ascension and its’ Altar Guild. She was also a member of the Daughters of the American Revolution, Diggers Garden Club, Valley Field Riding and Polo Club and the First Families of Arizona. She was a volunteer member of Family Service Agency for 20 years and American Cancer Society for 40+ years. She was a substitute teacher in the Madison and Osborn School districts. Jan devoted many years of service to her Pi Beta Phi Fraternity. Jan leaves behind her husband of 66 years, Tom, daughter Julie, son Mike and wife Peggy. Her granddaughters; Melissa Moore, Maranda Childress and husband Albert. Memorial Service will be held at 2:00 pm, Wednesday, October 20, at Christ Church of the Ascension, 4015 E. Lincoln Drive, Paradise Valley, 85253. In lieu of flowers, the family suggests donations be made to Banner Alzheimer’s Foundation, 901 E. Willetta Street, Phoenix, 85009 and the Altar Guild of Christ Church of the Ascension.