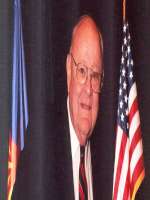 Lewis B. Moore, Jr., 83, passed away at home in Scottsdale on Thursday, May 17, 2012, after a brief illness. He is survived by his wife of 54 years, Alice, his children, Laurie Lang, Lisa Wilson (Greg), Lewis B. III (Ann), and James (Angela); his sister, Barbara Rider, and brother, William; his grandchildren, Michael and Jack Wilson; Matt, Molly, and Morgan Lang; Lewis B. IV, and Macy Moore. He was predeceased by his parents, Lewis B. Moore, Sr., and Louise Rickel Moore; his sister, Elizabeth Moore Schneider and son-in-law, Jamie Lang. Lew was born on February 27, 1929, in Clarkdale, Arizona. After graduating from Morenci High School, he attended the University of Arizona, where he was a member of Phi Delta Theta fraternity. He graduated with a degree in accounting in 1951. After working at Hughes Aircraft in Los Angeles, he served two years as an officer in the United States Army. He attended law school at the University of Arizona where he graduated With Distinction in 1957. After being admitted to the Arizona Bar he practiced law in Phoenix and Scottsdale until shortly before his death. Lew married the former Alice Burrus on December 21, 1957. They met while both were attending the University of Arizona and have been avid Wildcat fans ever since. They have been members of the U of A Wildcat Club for forty years. He will be truly missed by all of his family, including fifteen nieces and nephews of whom he was very fond, and by many dear friends. Lew will be remembered by all who loved him for his big heart, smile, quick wit, terrific sense of humor and uncanny ability to tell a good story. Visitation will be held on Friday, May 25, at 6:00-8:00 p.m., followed by recitation of the Rosary at 7:00 p.m., at Whitney & Murphy Funeral Home, 4800 E. Indian School Road, Phoenix. A Funeral Mass will be offered at 10:00 a.m. on Saturday, May 26, at Our Lady of Perpetual Help Catholic Church, 3801 N. Miller Road, Scottsdale, with interment at St. Francis Catholic Cemetery. In lieu of flowers, donations may be made to the St. Vincent de Paul Society, 2312 E. Campbell Avenue, Phoenix AZ ,85016 or to The Christ Child Society of Phoenix, 4633 N. 54th Street, Phoenix, AZ 85018.

Offer Hugs From Home Condolence for the family of MOORE, LEWIS B., JR.