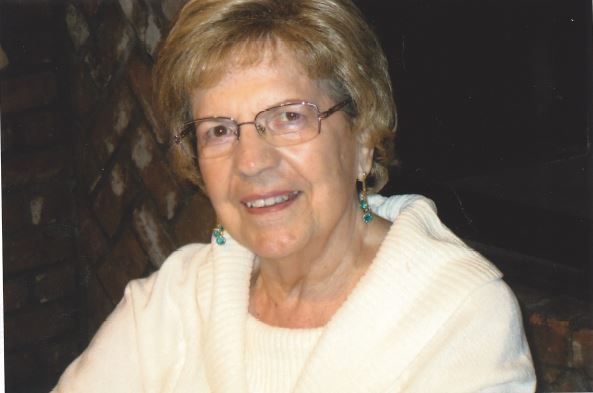 Alda Moravec, 95, of Phoenix, AZ passed away on March 1, 2020 after succumbing to a serious illness. Alda was a gentle soul that made the world become a more beautiful place on November 26, 1924 as Alda was born in Massachusetts and then moved to Connecticut where she was raised under her Mother’s strong Portuguese heritage.
Alda later moved to Tucson, AZ in the 1940’s where she happily worked as a cashier. Her heart became whole when a friend of hers introduced Alda to what was to become her true soulmate and forever love, Gene Moravec.
Alda and Gene listened to their hearts and after only three months of courtship, the two of them married and remained adoringly of each other throughout their entire marriage.
Alda and Gene moved their life to Phoenix, AZ to raise their family, as Alda made their dream house a loving home for her and the family.
Alda and Gene remained united in marriage for 61 years until Gene’s passing on March 17, 2011.
Alda leaves behind Jim Moravec and family in Colorado; Bob Moravec and family in Nevada and Stacey Moravec and family in Phoenix, AZ.
Alda was a beautiful, strong soul that always put other people first. She was a talented seamstress with a repertoire of designing and making full train wedding dresses, prom dresses and intricately embroidered wildlife captures, just to name a few. Alda always stride to make the family unit as one. She had a contagious smile with non-stop giggles, along with a strong passion for animals and life.
Alda will always be loved and remembered in every moment of every day. We will love you forever and always, Mom. May God bless you!
Visitation will be held on Wednesday, March 11, 2020 from 6:00 P.M. – 8:00 P.M. with a Rosary at 7:00 P.M. at Whitney & Murphy Funeral Home, 4800 E. Indian School Road, Phoenix. Funeral Mass will be held on Thursday, March 12, 2020 at 12:30 P.M. at St. Theresa Catholic Church, 5045 E. Thomas Road, Phoenix. Burial to follow at St. Francis Catholic Cemetery. Condolences may be expressed at www.whitneymurphyfuneralhome.com

Offer Condolence for the family of MORAVEC, ALDA