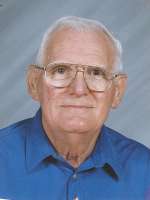 Gene, 86, of Phoenix, AZ, passed away on March 17, 2011, after a difficult struggle with his health and his family by his side. Born in Bee, Nebraska to Joseph and Rose Moravec on December 5, 1924.
After serving in the Army, he relocated to Tucson, AZ, where he met the love of his life, Alda with whom became his wife of 61 years. He worked in the grocery business until his retirement in 1986, after which he then worked at St. Theresa’s school until 2009. He leaves behind a loving family, his children Jim Moravec of Arvada, CO, Bob Moravec of Boulder City, NV and Stacey Moravec of Phoenix, AZ, plus seven grandchildren and one great grand-child, along with his sister Regina Fourr of Tucson, AZ. Gene was happiest when helping others. He enjoyed fishing, camping, watching sports, gardening and playing with the family pets. He will always be alive in the hearts of everyone that knew and loved him. God Bless you dad.
Visitation will be held on Wednesday, March 23, 2011 from 6:00-8:00 P.M., with a Scripture Service at 7:00 P.M., at Whitney & Murphy Funeral Home, 4800 E. Indian School Rd., Phoenix, AZ. Funeral Mass will be held Thursday, March 24, 2011 at 10:00 A.M., at St. Theresa Catholic Church, 5045 E. Thomas Rd., Phoenix, AZ.

Offer Hugs From Home Condolence for the family of MORAVEC, EUGENE