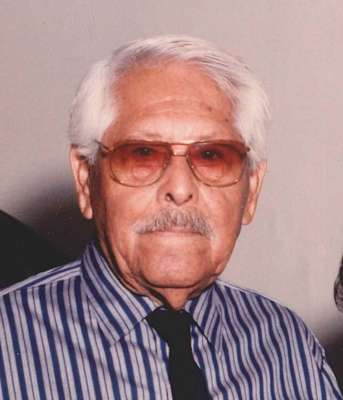 Our father, Nieves Morquecho of Phoenix, Arizona passed away to rest in the arms of our Lord Jesus Christ on Tuesday, December 2, 2014 with his family at his side.  He was married to Elvira Diaz Morquecho for 63 years.  After her passing in 1998, he remained a widower for 16 years.  He also survived his four sisters, Dominga, Ruperta, Soledad, and Blaza.  He lived to the age of 99. He was born in Zacatecas, Mexico in 1915 and raised in Phoenix, Arizona.  He was employed by Southern Pacific  Railroad and retired after 35 years of service.  For the rest of his life he enjoyed the sound of trains passing by his home; but he was mostly proud of the fact that he and his railroad companions built his family home where most of his children were born.  He remained there all his life.  He was a hard worker, a man of strength, courage, and determination to the end.  He was a veteran of WW II and a member of American Legion Post 1 for many years. He is survived by his seven children, Vera, Robert, Nieves Jr., Lupe, Margo, Rick, and Patty as well as all of Phoenix, Arizona. He is also survived by 20 grandchildren, 39 great-grandchildren, 24 great-great-grandchildren and many nieces and nephews.  His family was most important to him and he gave love and was loved in return.  He was a blessing to his family and will be greatly missed.  Vaya con dios nuestro padre. Rosary will be held at 9:30am with a Funeral Mass at 10am on Wednesday, December 10, 2014 at Immaculate Heart of Mary Catholic Church, 909 E. Washington Street, Phoenix. Interment will follow at 11:30am at St. Francis Catholic Cemeter

Offer Hugs From Home Condolence for the family of MORQUECHO, NIEVES MORA