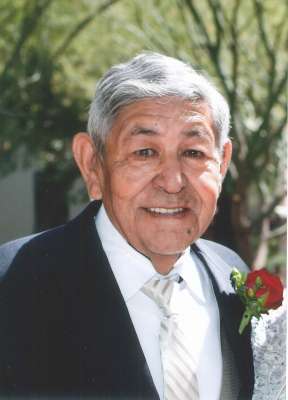 76, an Arizona native, passed away peacefully surrounded by family on Saturday, January 28, 2017. “Bobby” is preceded in death by his parents, Nieves and Elvira Morquecho. Growing up he learned from his parents that family is first. He lived that belief his whole life. During his high school days, he met the love of his life, Mary. They were married for 54 years. During their marriage, Bobby worked 37 years for the City of Phoenix, served 7 years in the National Guard, regularly attended St. Gregory Catholic Church and never missed any events his children participated in. He loved and was loved in return. He is survived by his wife Mary, children; Donna, Christina, Robert (Fatima) and Richard, grandchildren Andrew and Marcus; they were the sparkle in his eyes. He is also survived by his brothers and sisters: Vera, Nieves, Jr., Lupe, Margo, Rick and Patty, all Arizona natives. He was a blessing to his family and will be missed. Dad, we will always carry your memory in our hearts. Visitation will be from 6:00-8:00 P.M. with a 7:00 PM Rosary, Wednesday, February 1, 2017 at Whitney & Murphy Funeral Home, 4800 E. Indian School Road, Phoenix. Funeral Mass will be celebrated at 10:00 A.M., Thursday, February 2, 2017 at Immaculate Heart of Mary Catholic Church, 909 E. Washington Street, Phoenix. Interment will follow at St. Francis Catholic Cemetery. Vaya con dios nuestro padre.

Offer Hugs From Home Condolence for the family of MORQUECHO, ROBERT DIAZ