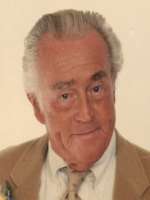 was born March 28, 1916 in Portland, Oregon to Esmond H. Morris and Frances Sigler Morris. He died January 21, 2011 in Scottsdale, Arizona. Bob spent the first thirty years of his life in the Portland area where he went to school, started his life’s work, and married Ruth V. Wallin. Bob and Ruth had three children together. The family moved to Phoenix in 1947. Bob and Ruth divorced in 1968.Bob married Patricia Waldren in 1969. They enjoyed their years together spending time traveling and with friends. Pat passed away in 2000.Bob started his career in Portland working for Portland General Electric and then moving on to work at the Bonneville Dam. After moving to Phoenix he worked for the U.S. Bureau of Reclamation. That job lasted over 40 years allowing him to spend time outdoors all over the state of Arizona. He loved his work and did it well. Another love in Bob’s life was photography. Bob was a serious photographer for most of his life. One of his favorite subjects was the sculpture of artist John Waddell.Bob is survived by his children David (Millie), Carole, and Bob (Bonnie), five grandchildren, 13 great grand children, one great-great grandchild, many friends including close friends Becky Frost and Cindy Ellis and the special dogs in his life, Abbey and Emily.A celebration of life will be held at 3:30 Friday, February 11 at the Unitarian Universalist Church, 4027 E. Lincoln Drive, Paradise Valley. In lieu of flowers , contributions in Bob’s memory may be made to St. Mary’s Food Bank of Phoenix, one of his favorite charities.

Offer Hugs From Home Condolence for the family of MORRIS, ROBERT ESMOND