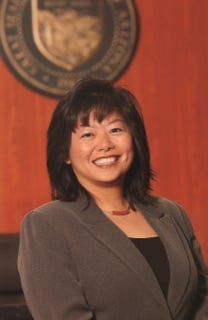 Judge Rosa Mroz died on February 5, 2022. Born Peng Shao Ching in Taiwan, Rosa immigrated with her family to the United States when she was 7 years old and went on to be an esteemed Superior Court judge. She was a loving and devoted wife, mother, sister, and daughter.

Rosa’s father was a Taiwanese diplomat, and after her family arrived in the United States, they found themselves in Chicago, Illinois, Queens, New York and later Miami, Florida. She became a naturalized American citizen when she turned eighteen, and later confided that the words of the judge who presided over that ceremony sparked her interest in law and the judiciary.

Rosa enrolled at the University of Hawaii, where she met Robert Mroz, originally from Massachusetts. From that first blind date – on Rob’s birthday – the two were inseparable. They moved to Arizona in January 1985, where Rosa got her accounting degree at ASU, and they were married in the spring of 1987.

Rosa worked as an accountant for a few years, then enrolled at what is now the Sandra Day O’Connor College of Law at ASU. After graduation, she served as a law clerk for Justice James Duke Cameron of the Arizona Supreme Court and Chief Judge Thomas Kleinschmidt of the Arizona Court of Appeals. Rob and Rosa’s daughter, Sarah, was born the month before Rosa took the bar exam. Their son, Tommy, was born during one of her clerkships.

Rosa practiced law at two prestigious law firms, the Maricopa County Attorney’s Office and the Arizona Attorney General’s Office. In 2004, Governor Napolitano appointed her to the Superior Court in Maricopa County, the first Asian-American woman to serve on that bench. Over her career, she served in family court, probate, civil and criminal assignments. She also served as Probate Presiding Judge, where she helped devise wide-ranging and much needed statewide reforms. Her longest and favorite assignment was criminal court, where she drew on her years as a prosecutor for insight, and where she was a frequent resource for colleagues. Rosa would respond in good spirit to any query, no matter how small or large.  She knew dozens of court staff by name. She trained and mentored countless other judges.

Rosa was an active member of the local Asian-American legal community, the Arizona Women Lawyers’ Association, and served on many justice-related commissions, task forces and committees. She received numerous awards, including in 2020 the Trailblazer Award from the National Asian Pacific American Bar Association.

Herself the daughter of a “Tiger Mom,” Rosa was that and more for Sarah and Tommy. No matter how late she worked, she would check the children’s homework after dinner, and if they were working into the early morning hours, she was awake with them. Along with Rob, Rosa attended every game or other school or scouting event. Other parents always knew her as Rosa, not as a judge with a national reputation for excellence.  While her career was important, Rosa was most proud of her love she shared with her husband Rob and the joy they both shared in raising their beautiful children.  Love of family and friends was her greatest accomplishment.

Rosa was predeceased by her father, John Peng, and her father-in-law, Walter Mroz.  She is mourned by her husband, Rob, her mother Nancy (whose formal name is Jane Peng), her children Sarah and Tommy, her brother David, and her extended family, friends and colleagues.

Offer Hugs From Home Condolence for the family of MROZ, THE HONORABLE ROSA