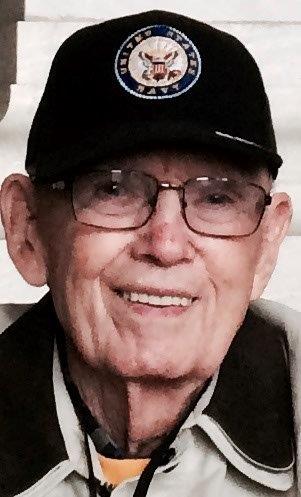 Surrounded by loving family, John Charles Mullarkey Jr., passed peacefully into the arms of his Lord on Sunday, June 09, 2019. John was born November 27, 1921 in Minneapolis, Minnesota as the only child to John Charles Sr. and Helen Mullarkey. John proudly served in the United States Navy during World War II protecting the Pacific Coast on the Goodyear Blimp from Japanese submarines and later serving on the USS Sitkoh Bay in the South Pacific.
He fell in love and married the true love of his life, Patricia in 1948 and would’ve celebrated 71 years of marriage with her on July 3, 2019. In 1955, John and Patricia moved their young family to Phoenix where he worked in Plating Sales for ChemResearch Co. and Talley Industries. John loved his family and taught them by example, treating others with honesty and respect. He loved to tell his children to always “do the right thing” because with a name like “Mullarkey”, people would always remember your name! He was very proud of his heritage and had the Irish gift of gab, always having a smile and story/joke to share. He was the eternal optimist and helped shape the lives of not only his children, but his grandchildren as well. He will forever remain an inspiration for future generations as a devoted husband, father, grandfather, great-grandfather and friend. John was preceded in death by his two sons, Michael (age 67) and Jim (age 61). Besides his wife Patricia, John is survived by son John Mullarkey III, daughter Cathy Meyer (Ken), daughter-in-laws Mary Mullarkey and Jennifer Mullarkey, and grandchildren Kelly (Jim), Jamie, Erin, Joel, Dan, Matt (Bergen), and Michael. John is also survived by great-grandchildren Aidan, Jack, Madeline, Jamison, Cassie, Maclan (on the way), and other beloved extended family members.
A Celebration of his Life and Visitation will be held at 6:00 P.M. on Sunday, June 30, 2019 at Whitney & Murphy Funeral Home, 4800 E. Indian School Rd., Phoenix. The Funeral Mass will be celebrated at 10:00 A.M. on Monday, July 1, 2019 at St. Theresa Catholic Church, 5045 E. Thomas Rd. with a reception in the parish hall following interment. The family would like to thank his caregivers and request that in lieu of flowers, a donation be made to Hospice of the Valley Northeast in Scottsdale.

Offer Hugs From Home Condolence for the family of MULLARKEY, JR., JOHN CHARLES