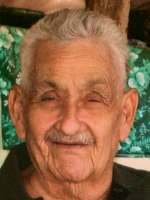 80, passed away on April 18, 2011. He was born in Duncan, AZ on May 2, 1930. Antonio served in the U.S. Army during the Korean War in 1951 where he was wounded when struck by enemy mortar fire. He received the Combat Infantryman Badge, the Bronze Campaign Star, Korean Service Metal and the Purple Heart. Later in his life, he worked for the Maricopa County Highway Department and retired in 1992. He loved to go fishing, solve crosswords puzzles, watch Jeopardy and baseball games. He is survived by his brother Martin (Lydia) Muñoz, sister Minnie (Carlos) Rodriguez and many nieces and nephews. Uncle Tony will be missed very much by all of us. Visitation will be held on Tuesday, April 26, 2011 at 10am followed by a Scripture Service at 11am at Whitney & Murphy Funeral Home, 4800 E Indian School Rd. Phoenix, AZ. Interment will follow at the National Memorial Cemetery of Arizona, 23029 N. Cave Creek Rd, Phoenix, AZ. In lieu of flowers, we ask that donations be made to the Foundation for Senior Living or the Disabled Veterans of America.

Offer Condolence for the family of MUNOZ, ANTONIO RUIZ