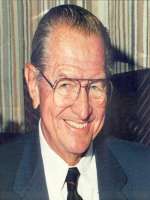 Bill Murphy, 89, of Phoenix, peacefully passed away on January 29, 2013.  Bill was born in Culver City, CA but grew up in Arizona.   Bill was a pilot in WWII flying B24 bombers and also served in the Korean War. He graduated from the University of Arizona in 1948 and was a member of the Phi Gamma Delta Fraternity. He was a principal partner at Cash, Sullivan & Cross Insurance Agency. Bill is preceded in death by his son, Rick. He is survived by his wife Sue of 58 years, daughters Ann Cleator (Tom), Mindy, son Mike (Marty) and 6 grandchildren.  A Scripture Service will be held at 10:30 am, Saturday, February 2nd, 2013 at Whitney & Murphy Funeral Home, 4800 E. Indian School Road, Phoenix.   In lieu of flowers contributions to Hospice of the Valley, 1510 E. Flower Street, Phoenix, AZ 85014.

Offer Hugs From Home Condolence for the family of MURPHY, WILLIAM “BILL”