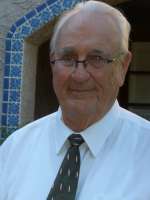 William “Bill” Murphy passed away Wednesday, May 11, 2011 at the age of eighty-seven surrounded by his loving family. He was born on December 18, 1923 in Medicine Hat, Alberta, Canada. The long Canadian winters led to Bill developing a strong skill and passion for hockey. He attended Washington State University on a football scholarship after serving in WWII, and graduated with a degree in Mechanical Engineering. He returned to Canada where he met and married his wife, Mary Hennessy, of sixty-one years.
A job opportunity brought the newlyweds to San Francisco, CA where they raised their family for the next 20 years. In 1972, the family once again relocated to Phoenix, Arizona where he was employed for many years by Armour/ConAgra Foods and Industrial Refrigeration. He was a family man who enjoyed spending time with his children and gave them a love of travel and many fond memories of summer vacations up the Pacific coast and throughout the country. Guided by his Catholic faith, Bill was a man that enjoyed the simple pleasures of life like fishing, camping, and following his children and grandchildren’s sports and their many activities.

He was preceded in death by his parents, two brothers, two sisters, and his son, Peter. He is survived by his wife, Mary; his children: KJ, Patrick, Terry, Brian, Michael, Bill, Madalene, Maria and Martin; 21 grandchildren and 5 great-grandchildren. Visitation will be held Sunday, May 15, from 6-8pm, with the Rosary at 7pm at Whitney & Murphy Funeral Home, 4800 E. Indian School, Phoenix, AZ. Funeral Mass will be held on Monday, May 16, at 10am at St. Francis Xavier Catholic Church, 4715 N. Central Avenue, Phoenix, AZ. Interment will follow at St. Francis Catholic Cemetery. In lieu of flowers, please send donations to Hospice of the Valley, 1510 E. Flower Street, Phoenix, AZ.

Offer Hugs From Home Condolence for the family of MURPHY, WILLIAM