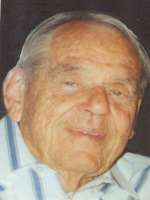 98, a Phoenix pioneer passed away on July 29, 2011. Born in Goshen, Indiana on August 15, 1912, he drove with his mother to Arizona to recover from tuberculosis at age 12. Our father was a wonderful storyteller and raconteur, right up to his sudden passing. He entertained family and friends with vivid personal experiences and historic events of the past 76 years in Arizona. Who else in Phoenix today can remember riding his horse to the grand opening of the Biltmore Hotel? Upon arrival in Phoenix, his mother enrolled him in Phoenix Country Day School. The following year he enrolled in Mesa Ranch School where each student had his own horse which they rode throughout the valley. He and his mother created and lived in a date orchard, which is now a park at 56th Street and Indian School Road.
Bob is preceded in death by his loving wife of 70 years, Leah Yvonne Mutschler. A big hole is left in the hearts of all who loved him. He is survived by his children George Robert Mutschler Jr, Priscilla Haynes (Chris) and Cheryl Smith (Greg). Eight grandchildren and 8 great-grandchildren. Bob is also survived by his family’s long time friend and companion, Clara Lopez and her son Gordon. The family wants to thank Bob’s caregivers Diane and Gayle, also Pastor Mack Yee who’s given him spiritual support over many years.
Visitation will be held at 9:30 AM with Funeral Service at 10:00 AM on Tuesday, August 2, 2011 at Whitney & Murphy Funeral Home, 4800 E. Indian School Rd., Phoenix, AZ. Interment to follow at St. Francis Catholic Cemetery

Offer Hugs From Home Condolence for the family of MUTSCHLER, GEORGE ROBERT