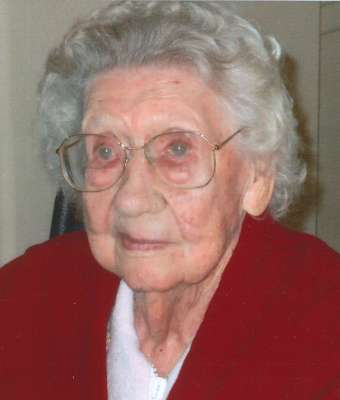 Lucille Jackson Myers, age 107, passed away Thursday, May 5, 2016. She was born on December 15, 1908 in Riverside, Warren County, KY, to Alonzo “Lonnie” Benjamin and Effie Rue Young. She was the eighth of nine children. She was proud that she was the first woman in her family to get a college degree. She taught 1-8 grades in a small rural school before marrying Rex Myers on July 16, 1931. With their marriage came five children from his prior marriage that ranged in age from 3-11 years: Thelma Margaret (Baird), Emma Belle (Ralke), Rex Myers Jr., Mary Gladys (Willoughby), and John Robert Myers. They dubbed her “Macille”, the name she was lovingly called for the rest of her life. She was married to Rex for 53 years prior to his passing in 1984. She is survived by their son Wallace Jackson Myers, 14 grandchildren, 24 great grandchildren, and 23 great great-grandchildren. Viewing will be from 3:00 – 4:00 PM, Sunday, May 15, 2016 at Whitney & Murphy Funeral Home, 4800 E. Indian School Road, Phoenix. Funeral Service will be held Monday, May 16, 2016 at 11:00 AM at First Christian Church (Disciples), 6242 N. 59th Avenue, Glendale, followed by Interment at 12:30 PM at West Resthaven Park Cemetery, 6450 W. Northern Avenue, Glendale. In lieu of flowers a donation to the church in Lucille’s name would be appreciated.

Offer Hugs From Home Condolence for the family of MYERS, LUCILLE J.