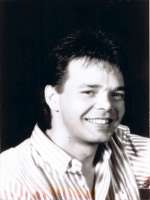 Louis “Tim” Nau, of Phoenix, Arizona passed away Wednesday, November 25, 2009 in Banner Good Samaritan Hospital after a long and valiant battle with Hepatitis C. Born in the Philippines, November 28, 1954, to Nancy and Louis Nau Sr., Tim loved spending time with his family laughing, playing, eating, joking and teaching. He enjoyed serving the Lord as a Minister of Hospitality, and was an avid ASU football fan. Tim was always the life of the party and will be greatly missed by all. Tim is survived by his wife Carol, his son Devon and his daughter Bailey, his father Dr. Louis Nau, his sister Nancy and her husband Monty and their two children Sabrina and Jake, his sister Susan and her two children Emily Jane and Phillip, and his sister Marta and her husband Mark and their two children James and Dara. Visitation will be held Monday, November 30, 2009 from 6:00 – 8:00 P.M. with a Rosary service at 7:00 P.M. at Whitney and Murphy Funeral Home, 4800 E. Indian School Rd., Phoenix. A Funeral Mass will be held Tuesday, December 1, 2009 at 10:30 A.M. at Saint Francis Xavier Jesuit Catholic Faith Community, 4715 N. Central Ave., Phoenix. In lieu of flowers, please send donations to the Saint Francis Xavier Knights of Columbus Council.

Offer Hugs From Home Condolence for the family of NAU, LOUIS