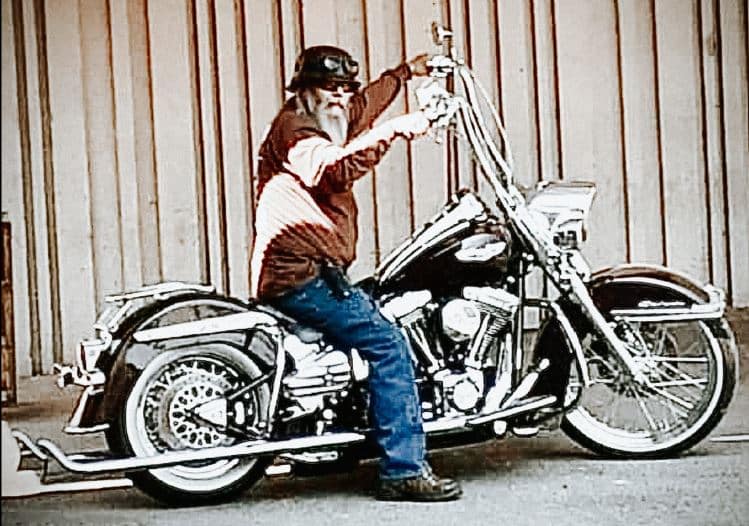 Seymour ‘Steve’ Nealis, native resident of Phoenix, Arizona, passed away on Friday, August 12, 2022 after suffering a heart attack. He held on just long enough to celebrate his 69th birthday with his family filling his hospital room to offer a final farewell.

Steve was a rebel and a dreamer – living life on his own terms and by his own code. He was a maker and schemer of ‘get rich quick’ schemes. His family and friends loved seeing the unusual inventions he would dream up. Steve had a wide range of interests and loved working with his hands. His latest masterpiece was a black metal coffin that he converted into a custom BBQ grill, equipped with speakers and LED lighting. Steve also crafted jewelry, furniture and custom embellished vintage sneakers. He built and worked on Harleys for most of his life. His bike was his joy and prized possession, but he could never pass up a good deal on a hot rod either. Steve had plenty of time for all his wild hobbies after retiring from the Arizona Department of Transportation Traffic Division in 2018 with 25 years of dedicated service.

Family, friends and neighbors will remember him always as ‘Crazy Steve’, a jokester and storyteller, a loner and free spirit, a tough as nails outer shell with a heart of gold. He would drop everything to be there for a friend in need. Steve was unapologetically himself; a man who was sometimes hard to know and love. He had a difficult time expressing his feelings, but he was a truly dedicated friend and loved his family fiercely, taking great pride in their successes and accomplishments. He is survived by his daughters, April & Kim. Grandchildren, Bailey, Alex, William, Owen, Ryan & Allison. Brother, Tommy Nunez Sr. & sister, Lollie Stayer.

He’s free at long last and riding a Harley in heaven with the wind whipping through his gray beard.

Offer Hugs From Home Condolence for the family of NEALIS, SEYMOUR “STEVE”