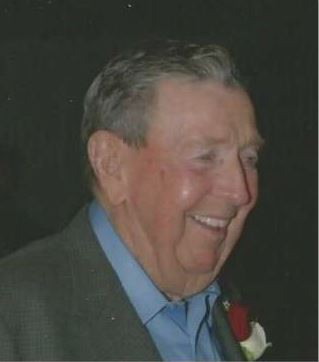 passed away peacefully in his Phoenix home on Monday, October 13, 2014 at 88 years of age. John was born August 3, 1926 in Pawnee, Sangamon County, Illinois to Leslie Neighbors and Mabel Shiveley. He was the youngest of 5 sons (Garrod, Buck, Barney, Earl) followed by a baby sister (Mary Lou). All five boys proudly served in the United States Military in WWII, all 5 returned home, and were deemed the “Five Fighting Neighbors” in their hometown paper. When the war ended, John returned home to meet and marry the love of his life, Wilma Jean Johnson. The couple traveled the States until they planted roots in Phoenix, Arizona where they happily raised their beloved children. John was a devoted family man, husband, father, Grandpa, GG, Uncle, and friend. He was a devout Catholic and parishioner of St. Thomas the Apostle Catholic Church for 52 years, as well as a proud union retiree and 66 year member of Local 469 Steamfitters, Pipefitters, and Plumbers where he served as President and Business Agent. John was an inspiration to his daughters, grandchildren, and family. He was preceded in death by his beloved wife, Wilma Jean, children, John Ray and Mary, parents, brothers, and nephews, Gary Lee and Patrick. His legacy lives on through his sister Mary Lou Mudd; his daughters: Lynn (Kyle) and Debbie (Vernon); his grandchildren: Shane (Melissa), Nathan, Candice (Steve), Danielle, Clinton, Cody, Lane, and Abby; great grandsons: Chase, Tanner, Noah, and Gage, and many nieces and nephews great and greater. Visitation will be held at Whitney & Murphy Funeral Home, 4800 E. Indian School Road, on Wednesday, October 15th, from 5-8 P.M., with a Rosary at 7 P.M. Funeral Mass will be held at St. Thomas the Apostle Catholic Church, 2312 E. Campbell Ave., on Thursday, October 16th, at 10:30 A.M. In lieu of flowers, the family asks that donations be made in John Neighbor’s honor to the Susan G. Komen foundation through their website (www.komencanaz.org) or via check made out to Susan G. Komen of Central & Northern AZ, 2040 W. Bethany Home Rd. Ste. 120, Phoenix, AZ 85015.

Offer Hugs From Home Condolence for the family of NEIGHBORS, JOHN LAWRENCE